·        Would you tell the readers a little bit about the book you are promoting?


The Bridge of Deaths is a cross genre novel with a strong factual side. Fictional characters explore and research a 1939 plane crash in Denmark; in which five men were reported dead.

As the characters explore the events of 1939 they find love and resolve phobias, fear and nightmares stemming from their past life. The data they find is carefully documented and footnoted.


My grandfather Cesar Agustin Castillo an executive for Standard Oil of New Jersey was one of the five men on board the plane, extreme curiosity about his life and death are what inspired me to write


On The Bridge of Deaths there are American, British, German, Palestinian historical angles to the story.


The inspiration for THE BRIDGE OF DEATHS was the mystery of my maternal grandfather’s death at the brink of WWII in Denmark. My family is originally from Mexico and at the time they were living in New York City. The facts were always questionable and I was determined to ‘solve’ the family mystery.


The book is a unique combination of facts and fiction, almost two books in one. On the fictional side there are three principal characters are three Bill, Maggie and Catalina.


-Bill is a rationalist, trying to cope with nightmares and phobias. Traditional methods have failed him so he finds himself open to the un-traditional.


-Maggie is a free-spirited, fun-loving, pacifist who thinks traditional methods are great as a last resort.


-Catalina is obsessed by her grandfather and the four other men who died in a 1939 Plane crash.  She lives more in 1939 than in the present.


The brunt of the book is the research of the 1939 plane crash and the characters there are MANY and the main characters range from the five corpses, the investigators, and even the airplane, as it is dissected and studied.


·        What actors or actresses would you play your characters if it were made into a movie?


Anthony Crossley – Colin Firth (He might not be young enough)


Because dreaming doesn’t cost anything… I will choose a sky is the limit crew for the parts of the various inspectors, engineers, airline owners and politicians  as they can be older, Tom Hanks, Bruce Willis, John Travolta.


THE BRIDGE OF DEATHS links 1939 to present day London. It is a historical journey as much as it is a journey of self-discovery. With the Second World War a mere two weeks away, the crash of an airplane in Danish waters near a bridge called Storstromsbroen, did not get the attention it deserved. The past and the present are linked as Bill is looking for psychological answers to his recurring nightmares; he meets Maggie who is very familiar with the bridge in his dreams. She urges him to look for these answers through past life regression therapy. They join forces with Catalina whose grandfather also died in the same accident that haunts Bill's dreams.


Now for a little fun, here are some things that the readers might want to know about you.


1. If you could live anywhere, would you rather live?  MOUNTAINS


c. in the country

2. What would you prefer?  Sweet and Salty.

3. If you were stranded on a desert island, what is one thing you couldn't live without?


It would have to be my Laptop with a solar battery.

4. Choose one of these books.  Pride and Prejudice


a. Pride and Prejudice XX


d. Snow White and the Huntsman

5. Which word most suits you.  D. Studious


6. Tell me something about yourself that might be funny to others?


I sound like a dying hyena when I sing; so I sing loud when I am alone in my car…I hope the commercials are true and that it is sound-proof.


7. Which group of words explain what you are like the most?  A) Flying by the seat of my pants.


a. fly by the seat of your pants  XX

A HUGE THANKS TO TRACY KAUFFMAN 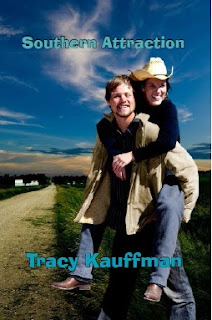