~MUNGAI AND THE GOA CONSTRICTOR~ by AMELIA CURZON 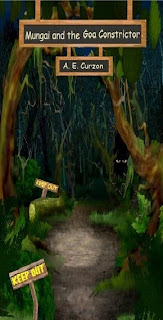 Mungai, a jungle creature of indeterminate origin, happily ambles through life dreaming up scandalous get-rich-quick schemes. On his travels he meets Goa, an equally ruthless and selfish Boa Constrictor. Having explained to her "the usefulness of the lesser species", and his latest highly profitable master plan, Mungai tempts Goa into joining him in his search for as many unsuspecting creatures as they can muster.
Very soon they meet and befriend some innocent animals of the woodland, including Bodger, an amiable and easily led badger. With much flattery and tale spinning, Mungai manages to coax Bodger and his friends into joining forces with him and Goa in his latest ill-founded chicanery. So convinced are the little animals by Mungai's anecdotes of wealth and happiness, the gullible companions persuade multitudes of other species from the woodland, jungle and rainforest to come along as well.
But, things are not quite what they seem, and before long, through the force of sheer greed, the future of their beloved environment is in the balance.
"Amelia Curzon has created a beautiful fable in "Mungai and the Goa Constrictor" that warns of the effects of destruction of the forest in a fashion that is innocent, entertaining and compelling" - Scarlett Raines
"A witty and fascinating story filled with a splendid collection of characters" - Jason Sullivan
ABOUT THE AUTHOR
Having grown up in the Mediterranean and having later lived and worked in various countries, Amelia Curzon eventually settled permanently in the United Kingdom.
She is the mother of two grown children who provide her with much of her inspiration in life. Amelia's interests include horses and all other animals, the environment, reading, and of course writing.
Amelia has been writing short stories and poems since childhood and had created and narrated many stories to her own children in their younger years. Insomuch as her stories have always been about animals it seems only natural her first novel be written for the genres children and teen and contain lots of four legged creatures.

ON A PERSONAL NOTE
I love this book, I found the prose reminiscent of Rudyard Kipling and it is as entertaining as it is sophisticated. The story line creates great awareness about respecting the environment whilst it will enhance the vocabulary of children. It is truly a book for people of all ages...from 9~90.
Posted by M.C.V. EGAN at 11:22 AM