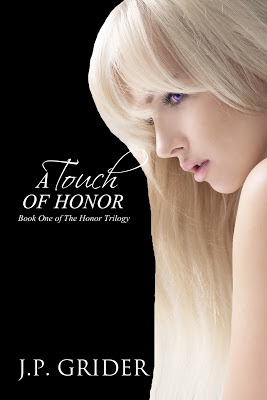 Honor hurts…all the time. The doctors say she’s fine – it’s all in her head. But Honor feels pain. What she doesn’t know is…it’s not her pain– it’s everyone else’s.
Seventeen year-old Honor Stevens is not an ordinary teenager. Sure, she looks like one on the outside…but on the inside, there’s a whole world of pain going on. Honor is an empath. That means she can feel other people’s pain – like that of the girl who is about to be raped in the woods, or the girl who is dying of cancer, or her mom…who is suffering a heart attack. What she doesn’t know is what Ethan Sutherland comes to town to tell her – she can save these people. But at what cost? For every life Honor saves, she knocks years off her own.
When Ethan comes looking for her, he isn’t counting on falling in love. Now that he has, he wishes he hadn’t told her about her abilities. Though he tries his best to talk her out of saving every soul, Ethan loses the battle – Honor’s too nice for her own good.
Then there’s the matter of Ethan’s estranged, morally corrupt half-brother, Storm – he loves Honor too. And because Honor is intrinsically empathic, she’s aware of Storm’s softer side and begins falling for him as well.
When the two brothers are forced to work together against a group of evil empaths who are after Honor, they need to put their differences aside and focus on saving the one girl they both love.

A Touch of Honor is a paranormal love story of a different kind. In a world gone mad with vampires and werewolves, A Touch of Honor tugs at the heartstrings with a girl out to heal the world…one person at a time.

When a rock star loses his wife AND his career simultaneously, he must overcome his demons to fall in love again.

When Mara Giordano comes knocking on his door, Tagg Holland sees a light at the end of his decade-long tunnel of despair.

Suddenly, the call to fall in love and to reemerge as the Nation's most beloved rocker (along with Jon Jovi) urges him to put the wheels in motion and try romance as well as head back to the stage.

With his mother's support and a new relationship budding, Tagg believes he will finally overcome his tragedy and grow from it...until another near-fatal accident threatens Tagg's resolve and sends him plummeting once again.

With his emotional stability teetering on the edge of another breakdown, Tagg Holland may not have the strength to overcome a second casualty. Will the love he'd found in the last few months be strong enough to see him through?

Will he reemerge as the soulful singer, someone like Chris Daughtry, who is loved and respected...or will he end up like Jeff Buckley - dead?

Lena Giordano has just met Rick Murphy. So why does she have the glaring suspicion that she's met him before?

How would you feel if a man you just met triggered visions of a haunted life that was not your own, but those memories inflicted pain and fear as real as if you had lived through them?

And, what if those visions were a warning of a similar fate?

Would you have the courage to change your own future by arranging those warnings, like pieces of a puzzle, to form a new destiny?

For Lena Giordano, finding that courage isn't going to be easy. Abused relentlessly by her fiance, twenty-five year old Lena is putting herself in danger by not breaking her engagement, and her visions of her great-great grandmother, Angelina, are confirming this risk. Then, thirty-eight year old Rick Murphy appears, claiming he has been in love with Lena for nearly one-hundred years. Rick's presence triggers nightmares even more intense than before, forcing Lena to put the pieces of her visions together to learn her destiny. Though for Lena, even after her paranormal puzzle is complete, the bravery she needs to open her heart is even more tormenting than the abuse she endures.

Take the journey with Lena through her surreal fantasy land and find out if her own self-worth is strong enough to deserve a man who would cross lifetimes to be with her.

Maybe This Life, a romantic suspense, is a story about past lives and second chances; a reincarnation, past-life, time-travel, love story - A romance of two souls who couldn't stop at one lifetime to be together.

J.P. Grider (1966 - ) born in Paterson, New Jersey as Julianne Pellegrino, was raised in Haledon, New Jersey, the oldest of six siblings. Her love of writing started early in her childhood, when she started writing poetry in-between homework assignments. As part of a school work program as a Journalism major in High School, J.P. Grider worked as a freelance reporter for a local newspaper, writing feature stories about exceptional high-school classmates. She studied Television Production and Film Writing at Seton Hall University in South Orange, New Jersey, where she graduated with a Bachelor's degree in Communications.

Two of J.P. Grider's novels have won awards in the Textnovel Writing Contest, with her recently published, Unplugged (A Portrait of a Rock Star) reaching Semi-finalist position. Though Unplugged is not her first novel written, it is the first to be published. Her second novel, Maybe This Life, published Summer 2012, was actually her first attempt at writing a novel. After completing the whole manuscript, Grider decided to scrap the whole thing and rewrite Maybe This Life from scratch. In Grider's opinion, the difference between the two were night and day.

Currently, J.P. Grider is working on a Young Adult Paranormal love story and continues to work on stories in her main genre, Contemporary/Paranormal romance.

Or Visit  online at: