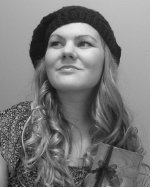 Jansina has been writing ever since she could do more than make meaningless scribbles with a crayon. She began her writing career at 13 with a newspaper column, Jansina's Journal.
Her goal is to create realistic Christian fiction for young adults that will both entertain and inspire. This is her first published novel, though she has over one hundred published articles, short stories and poems in various newspapers and magazines (including the Saint Paul Pioneer Press and Brio).
She is a native of Minnesota, and a few years ago discovered Backus, a little-known town of 300. Although she may never live there herself, she lives vicariously through her characters. Jansina is in the process of writing two additional novels, and several short stories-all with the setting loosely based on that little town. Many of the characters in Forgotten Memories play larger parts in those stories.
When not writing, Jansina works in marketing, and also copy edits others' books, scholarly papers and articles. In her spare time she enjoys Irish and swing dancing, singing, and rereading Austen's novels. She doesn't spend much time in cemeteries.

“So, um...this is awkward, but...that's my grandma you're sitting on.” A half smile inched across the young man's face, and he motioned to the headstone I was leaning against.
“I am so sorry,” I said, quickly standing. “I didn't realize—I mean, I should have realized—I just—I'm sorry.”
The man chuckled. “Told you it was awkward,” he said, his eyes crinkling at the corners as he continued to smile. “I'm Joe.”

Life in Backus is, in Ella's mind, akin to the observation in Pride and Prejudice: "For what do we live, but to make sport for our neighbors, and laugh at them in our turn?"

Ella wants out, and the arrival of her friend's handsome cousin threatens that dream. Joe starts working her job in the diner, gains the respect of the town, and--worse--causes her to like him.

"You probably aren't used to people just walking into your house. At least, not ones you've never met." The strange girl giggled.
"Um," I shifted uncomfortably. "Hi?"
She took my greeting as an invitation to step farther into my room.
"Who are you?"
"Oh!" She laughed. "I'm Rosie; I live next door. You're Jane, right?"

Jane, who recently moved from the Twin Cities, just hopes to fit in. The talkative Rosie and a position on the Backus newspaper help that happen...but as she continues looking into the town's past, she finds more mysteries than explanations.
BUY e-book @ AMAZON
Mical Benson’s father is guarded, so Davey Blake’s invitation to the Benson’s home is evidence of his good character. Still, Mical knows it is the perfect opportunity for him to work his way into their hearts before stealing her father’s great wealth. In spite of her suspicions, Mical eventually falls into his 'trap'. As they move beyond mutual loathing, they learn that some things aren’t as obvious as they first appear. Everything is working in their favor, but when Davey’s past returns, all he has built up may be lost forever… This modern retelling of the 1 Samuel 18 Bible story delves into the motivations and challenges Davey and Mical meet on their journey to trust and faith.
BUY e-book @ AMAZON