Aneesa Price is the  Author of Adult Paranormal Romance, Contemporary Romance and Erotica Home For Love

Someone recently told me that street teams are the new ‘it’ thing and that they are falling as fast as they’re established. Fortunately, this was news to me as since having formed one of my own, I rarely have to visit the myriad of groups I first spent hours on when I joined the indie writing virtual community. But it made me sit back and think on why my street team seems to be thriving and how I went about creating one. I don’t profess to be an expert as I learnt through trial and error as much as the next indie writer, but I can happily share what I feel each new indie writer needs to know to create a street team that is not only beneficial but sustainable.


I first came across the term, Street Team, when I began to befriend people amongst the Facebook literary community. I assumed that it was a team of volunteers, fans if you will, that ‘walked the streets’ of their neighborhoods and workplace handing out swag and flyers concerning an author’s books. My assumptions were not so grandiose as to imagine meetings to discuss the author’s work or flash mobs but as a new indie writer, I was in awe of the authors who had such teams. Nothing occurred to disprove that assumption until I was asked to join a few street teams.


Being someone of an amicable nature, I agreed and was rather surprised to find that the streets the teams walked were the virtual ones - Twitter, Pinterest, Facebook, Google+ and Goodreads being amongst the most prominent marketing walkways. Another assumption was rectified when I discovered that the members of the various street teams were not all fans of the author. I did receive a number of private messages asking me if I’d like to join a street team. Having made the decision to learn vicariously as far as possible, I agreed. I have no idea why I was asked to join some of these street teams for I had not even read or reviewed any of these author’s books.


Then, one day, a very successful indie writer and friend of mine relayed an experience she’d had where a stranger came up to her on a book tour and commended her street team for their excellent work. The stranger had never read the author’s books before but her curiosity was piqued by the extensive marketing the street team had done, and I quote, “all over Facebook”. Now that made me sit up. I then decided to go and have a closer look at this particular street team and those of the more successful indie writers who are prominent on Facebook and this is what I found:


- The groups are secret or closed groups,


- The groups are tiny in comparison to some of the other groups,


At this point I already had a fan club on Facebook, albeit a small one, which was kindly set up by friends who I had met through the publication of my books. I decided to go for an approach that worked for my busy life - being that of a mother, wife, senior manager in a corporate environment and writer. I asked for street team volunteers both on my Facebook wall and Fan Club group wall with the focus of their efforts being placed on my forthcoming release at that time, Home for Love. I was both flattered and pleasantly surprised by the number of people who put up their hands. Taking encouragement from this, I began my efforts via ‘street team alert’ posts on the fan club wall and private messages (or PMs) to the members. It worked like a charm.


The team began marketing my new release before it was published, changed their profile pictures to that of my book cover and some of them both read and reviewed the books. Some of them even went so far as to feature my work and the new release on their blogs. Others assisted with the virtual release party. What I did in return was sincerely acknowledge the street team members in the release, listing all their names. I gifted each member an ecopy of the book via Amazon and after having discovered the creative talents of one of these members, I arranged for each of them to receive a thank you from me in the form of a book cover necklace. And at the risk of sounding self-righteous, I believe very much in ‘indie karma’ and ensure that I also support their blogs, groups, pages and so forth as far as possible. In other words, it’s not just about me - it’s about us. And therein lies the differentiator between a fan club and a street team. In a street team, the author is one of the pack, albeit the alpha, but someone who gives as much as he or she receives.


The results of the Home for Love Street Team efforts were astounding. Within the first month of publication, Home for Love hit the Amazon Top 100 for paid in Kindle for 2 days. Although sales have dropped since then, sales are still occurring. What’s even more encouraging about having a street team is that throughout this experience I had hardly done any promotion myself. I focused instead on finalizing the release and writing my next book.


Since then my street team has migrated from my Facebook fan club group to a secret group. This, as I observed from the street teams of the successful writers I referred to above, works out so much better. There is a sense of liberation in having a group of individuals who believe in you and voluntarily support you whom you can discuss your work with, seek advice and generally joke around with. In essence, my street team are no longer just individuals who volunteered to help me market my work - they are friends and amongst those individuals whom I trust the most with my work.


So, would I recommend that you establish a street team? Yes! Yes! Yes! If you go about doing it the right way and for the right reasons, you’ll find that it is the smart thing to do.

Home for Love by Aneesa Price 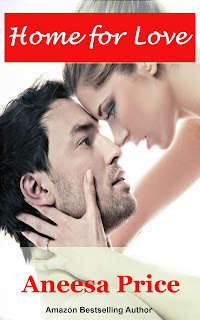 
Seven years ago sexy Bree Tanner fled Devil's Peak, Alaska, disillusioned with her high school romance and with a baby in her belly. Now, she's back and seeing devilishly handsome Todd again challenges her carefully constructed plans for amicable co-parenting.


Todd's delight at Bree's return swiftly turns to disgust when he discovers her secret and he vows to keep her at arm's length. Upon discovering the context behind her secreting their child, he decides to give their daughter the love and stable family home he never knew. Bree, despite her attraction to Todd, has no interest in rekindling their relationship and is focused on settling into the town.


But the town and its match-making busy-bodies are not willing to allow the lovers to remain apart and test their resolve in a series of planned misadventures.


Bree is home for good but will she be home for love?