~MORALITY FOR ATHEISTS; Reasons not to go on a Rampage ~ by Mary Louise Adams 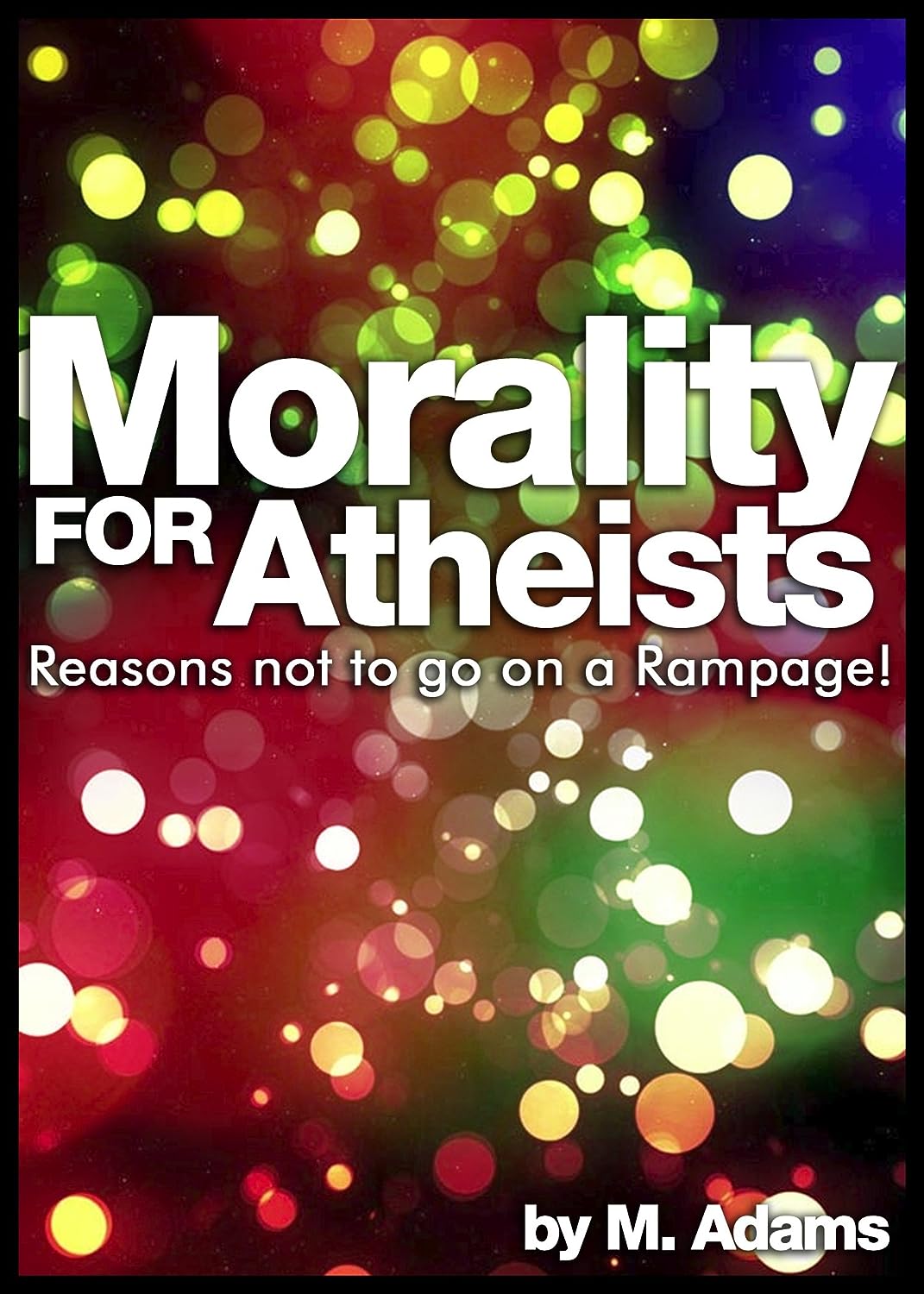 RELIGION AND MORALITY. For far too long, religion has been considered to be a pre-condition of morality and many still believe you could not have one without the other. But what would this mean for atheists, if this were true? What exactly is preventing atheists from going on a murderous rampage? Can atheists be moral?

This short concise book aims to tackle the common misconceptions regarding morality, atheism and religion using reasoned argument and a refreshing slice of humour.

About the Author: Hi, I'm Mary-Louise Adams. Sometimes I write stuff down and sometimes it makes people laugh. My life goals include getting a bigger place so I can adopt two Great Pyrenees or Bernese Mountain puppies (aww, puppies!) and getting over my fear of pigeons. Thank you.


RELIGION AND MORALITY. For far too long, religion has been considered to be a pre-condition of morality and many still believe you could not have one without the other. But what would this mean for atheists, if this were true? What exactly is preventing atheists from going on a murderous rampage? Can atheists be moral?


This short concise book aims to tackle the common misconceptions regarding morality, atheism and religion using reasoned argument and a refreshing slice of humour.

Hi Mary-Louise Adams and welcome to 4covert2overt A Day in the Spotlight.


I chose to interview you because I was raised a Catholic and have had the opportunity to live in various countries; one of which is Sweden. I became so amazed that in general they were a people with little to no religion and yet very honest and moral in general. My philosophies have evolved with the years and I find all forms of religious and non-religious belief interesting. So let’s try to tackle a question or two that at least in America is bound to raise eyebrows.


Thank you for having me! I am very excited. I was also raised Catholic and have travelled to countries with varying approaches to religion.


Were you raised with any formal religion?


Absolutely. I come from a very strong Roman Catholic background. Both my parents are Catholic, they had me baptized as a baby, along with my brother and sisters. I went through my first communion with my little sister as a child and I remember I found the whole experience very exciting. It was a rite of passage. I started having the first niggling doubts around the time that I got confirmed which is somewhat ironic as this means I’m still technically Catholic.


Are you surrounded by religious people?


Not really. I certainly was as a child and as a teenager. I went to an all girl’s catholic school , which used to be a convent and attended Mass twice a week. Most people think that my childhood put me off religion but that is not the case at all! Many of my classmates really resented having to go to Mass, which was compulsory but I loved it. I loved being in our school chapel and I really felt like I was part of something bigger than myself. These days, I am friends with people from all walks of life, religious and non-religious.


Ethics and Morality are supposed to be the cornerstones of faith, that being said historically so many wars have worn the cloak of religious conviction, does your book address that?


It does, in a roundabout way. As you say, many religions have tried to claim copyright on morality but if you look back in history, it’s clear that morality derives from rational reasoning, not religious texts. God did not invent morality, we humans did that. This is the reason why there are passages written down in the bible that do not really sit well with modern Christians today but ancient Christians would not have bat their eyes at.


What is the most common misconception in your opinion about atheists?


That all atheists are morally lazy, choosing to disbelieve or ignore God’s existence, the easier option compared to living by religious rule and doctrine. This leads on to the idea that atheists are more likely than the religious to behave unethically.


What are the differences between morality and ethics?


Morality refers to personal character i.e your internal moral code while ethics refers to the rules and behaviors set for us by society.


What questions do you wish I had asked?


It has been a pleasure! Thank you for asking such insightful questions.

*****   More Fun Than "The God Delusion" June 26, 2013
By John Cottone - ''Reflections''
In "Morality for Atheists," a short and readable book by Mary-Louise Adams, the author does a wonderful job of extolling the virtues of atheism and questioning, with an open heart, why there seems to be so much unsubstantiated hatred for atheists. She openly asks: "why hate atheists?" and makes herself vulnerable by asking the question so directly and honestly. She should be cheered for this.

In my opinion, Ms. Adams does a better job than Richard Dawkins in "The God Delusion" (another book I have reviewed) at making arguments to defend atheism that are fair: she honestly acknowledges that some atheists are truly morally abhorrent (e.g., Jeffrey Dahmer) and that there are many theists with high moral character. As such, she seems less willing to make polemic arguments to suggest that atheism is better than theism for producing moral behavior than she is to defend atheism from those who critique it unfairly. She makes her arguments with humor and wit (certainly more humor than Richard Dawkins) which makes the book a very playful read.

I am not an atheist, nor am I a religious fundamentalist. I have, what most people would consider to be, moderate religious and spiritual beliefs (combining philosophies and beliefs from a number of different Eastern and Western religious and non-religious traditions) and I enjoy the process of existential questioning, knowing that the answers to my questions might take me outside of my existential comfort zone. Hence, while I don't have any major critique of the book, I feel compelled to present a non-fundamentalist argument about how religion and spirituality can aid morality, given that the book covers many of the negative aspects of religion in the realm of morality. While it is certainly true that being an atheist does not preclude an individual from engaging in consistent moral behavior and being a theist does not guarantee that a person will always engage in moral behavior, my experiences as a psychologist, as well as someone who did his dissertation on religious and neurological predictors of Kohlbergian moral reasoning, and as an individual who has engaged in considerable introspection in the context of meditation, suggest the following:

1) Being good is not a black-and-white issue: morality is very nuanced and operates more on a continuum in each situation, and in every situation there is a range of potentially moral and immoral behaviors to engage in. Say, a homeless man on the street asks you for money: you can choose to look at the situation in black-and-white terms - either you give the person money or you don't - but this approach denies that there are many other options at hand. You can choose to give the man $1, $50, or take him out to lunch and help him find a job. Or, on the other end of the spectrum, you could either ignore him, make a pejorative comment as you kick him, or call the police over to have him arrested.

In my experience, religion and spirituality can help motivate people to a) evaluate their behavior on a regular basis (e.g., Catholics are urged to go to confession on a weekly basis to ask forgiveness of their sins); and b) continue pushing the limits of moral behavior and compassion (e.g., in the case of the homeless man, perhaps giving him $10 the next time you pass him instead of $1). It is not that atheists don't have the ability to evaluate their behavior on a regular basis or have any incentive to push the limits of their moral behavior and compassion, it's just that religious and spiritual people tend to get more reminders about doing this and have a system set up already to do this.

2) The psychology of religion encourages people to be more generous and compassionate than they might otherwise be. No one can prove that God exists. However, amongst those who believe, there is a belief that not only does God exist, but that one will be rewarded (either by God or the law of Karma) at some later time in the FUTURE for moral behavior in the PRESENT. Essentially, for those who believe in God, they are likely to believe in a sort of existential investment bank for good behavior: you make initial investments into the bank NOW in the form of good behavior, and at some other point in the FUTURE (either in this life, or the next), you will be rewarded.

Now, we can argue that if people only engage in moral behavior because they think they are going to get some existential reward, there is very little merit in that because this is ultimately a selfish act. However, if one believes (without any proof or definitive evidence) that they are going to be rewarded in the FUTURE for their good behavior NOW, it can lead them to be much more generous and compassionate than they would otherwise be, which would likely make the recipients of this kind of compassion pretty happy.

Essentially, if believing, as Jesus suggests in the Gospels, that when you give to the poor without telling anyone you will be rewarded "tenfold" in the Kingdom of Heaven, and this leads a person to donate $1,000 to UNICEF instead of $50, do you think that the children who are benefiting from this larger donation really care about the existential motivations of the person donating the money? Furthermore, as one continues down the road of compassion, one is bound to realize that doing good is its own reward. However, for many of us, choosing to go down the road of compassion is a tough sell because it requires initial sacrifice. As such, religion, with its existential investment bank of goodwill promising a "tenfold" return-on-investment, can provide the initial impetus for a selfish individual to start down the road of compassion so that he may one day discover doing good to be its own reward.

John G. Cottone
The writer is the author of:
"Who Are You? Essential Questions for Hitchhikers on the Road of Truth"