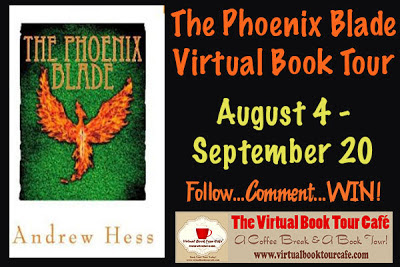 The Phoenix Blade
by Andrew Hess

Andrew Hess (1983-present) was born in Lindenhurst, NY where he spent most of his life. After living in the New Paltz/Poughkeepsie, NY area for five years (2003-2008) he returned home to Long Island to pursue his dream of writing. Andrew published his first book, The Chamber of Souls (2011), where he blended free verse poetry and short story into one book. 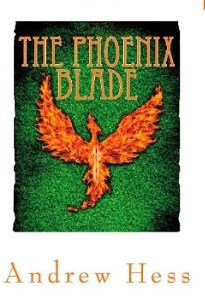 Follow the journey of Andrew Lancaster and his friends as they are thrown in the middle of the biggest government conspiracy to hit the United States. Andrew is contacted by a man known only as the Benefactor.; claiming to be a government official that has been monitoring Lancaster and his friends. He is told they have enough evidence to arrest them for treason, but would like to hire them instead for a top secret government project. As a bonus the Benefactor says he will reveal something Lancaster has wanted to know for the last six years. Who killed his mother.

“I keep thinking how so much has changed in the last ten years.” “Here we go again.” “I mean it. When we were kids everything was different. The world was more peaceful. Everyone got along and helped each other. But now everyone’s fueled by greed, corruption, and they get some sick pleasure from hurting others.” “I know what you mean, but there’s not much we can do about it. Too many people think they have to do whatever’s necessary to get ahead in life.” “I still wish we could change it.” “Yeah, it’d be great to get rid of all those people.” Mike reached for the remote to turn the movie back on. “Too bad it’ll never happen.” I knew he was right. Our idea was ludicrous. But at that moment, my cell started ringing. “Talk to me,” I answered. “Yes hi, I’m looking for Mr. Andrew Lancaster,” a stern confident voice said. “Who’s calling?” “Someone who has the power to change your future.” “If this is some telemarketer, you can hang up now. I’m not interested. “I assure you this isn’t a sales pitch and I’m not a telemarketer.” “Then what do you want?” “It’s come to my attention that you and a few friends have been talking about eliminating certain types of people.” “What are you talking about?” “Don’t play dumb Mr. Lancaster. You and your friends have been monitored for some time now. We know everything.” “Who are you?” “I’m someone from the government that would like to give you an ultimatum. We have e-mails and recorded conversations between you and your friends talking about killing people that are as you said evil.” “Look, Mr. we were only joking around.” Mike heard the panic in my voice. My face turned pale white. “What’s going on,” he whispered. I placed the call on speaker and placed a finger to my lips. “Be that as it may. You’ve been under our watchful eye for several months. Now, we can do this the easy way, or the hard way.” “And that would be?” “The hard way is we send our agents to your house and arrest you for conspiracy and possible treason.” “Are you fucking serious,” Mike shouted. I quickly covered his mouth with my hand. “Who is that? Who’s with you?” I didn’t reply. I could hear him rifling through papers. “Ah yes, that is most likely Mr. Santangelo.” “How does he know my…” “What’s the easy way,” I asked. The man cleared his throat. “Simple, we hire you to go through with it.” I laughed it off immediately. “Yeah right, and next you’re going to tell me that I’m the next in line to be King of England.” “I don’t know about that, but I’m very serious. We have a list of targets and evidence that proves their illegal activities. We would like to give you the chance to make the world a better place.” “If you have evidence against them, why not put them in jail where they belong?” “Because they have ways of getting around our judicial system. We all know it’s fallible.” “But why me?” “Who better to lead a team than someone who has never received justice for his own mother’s death?” “But it was ruled an accident.” “That’s what you were led to believe. I have proof she was murdered and know who’s responsible.”