An Interview with Author A.K. Kuykendall

A dedicated husband and a father of three, A.K. Kuykendall was born in Albany, Georgia and grew up as a military brat on the Kaneohe Bay Marine Corps Base Hawaii (MCBH) located in Kailua-Kona, Hawaii and later at the Camp Lejeune Marine Corps Base located in Jacksonville, North Carolina.
A Corporate Executive Chef by trade, his true passion in life is writing thought-provoking novels that blends the concepts of fact and fiction. Conspiracy, espionage, horror, and suspense literature are particular favorites! He has an infectious love of bringing women to the surface in his literature where so many men and/or women authors fall short. This is why Mr. Kuykendall prides himself on writing stories with women as his protagonist’s. Read More...... 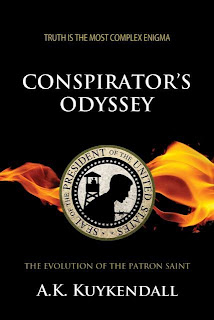 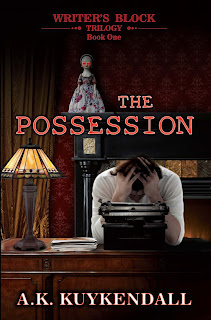 Since his youth, Gregory Stillingsworth has known his destiny: to become a great writer. Indeed, now a wildly successful author, he has penned seventy-three novels, all of them best-sellers. Obsessive and possessive, he writes the old-fashioned way – on a typewriter. His instrument, beaten and tattered even when his parents gave it to him for his fourteenth birthday, has earned a name over the years – Buford. It has also earned a voice. Early on, it spoke to him, repeating a simple mantra: “You and I, forever. You and I, together.”
Gregory Stillingsworth, a world-renowned horror writer, an author who has already surpassed the great ones like Koontz and King, was destined to reach the top. Or was he? Was he destined, instead, to live the life carved for him by his cursed forebears? Instinctively, it has always been Gregory’s custom to write his books one after another. His wife, Jamie, who serves as his lawyer, critic, and business partner, gave up convincing him to slow down so as to focus on starting a family. Gregory is relentless in nourishing his career; that is, until for the first time, he runs out of words, sending him into an uncontrollable rage that even his wife cannot comprehend. Is this unexpected rage an extreme reaction to the stresses of writer’s block? Or is it the unveiling of his true role among us, a scribe born into this world only to write of the coming Armageddon?
Writer’s Block: The Possession is a dark, horror story, a psychological thriller, and a labyrinthine cryptogram that the reader must unravel one scene at a time. With no way to tell what is truth and what is fiction from Gregory’s perspective, the reader is led to wonder how much of this novel is autobiographical information from the real author’s perspective, taking the horror factor from the realm of fiction into the realm of possibility. As part one of the Writer’s Block Trilogy, The Possession leaves the reader on the edge of his seat, chewing his nails, anxiously waiting for a resolution.IN THE WRITER’S BLOCK TRILOGY . . .

What inspired you to write these particular stories ?

Many have inquired what motivated the Writer’s Block trilogy and about the historical content throughout book #1—The Possession. They have asked what Gregory Stillingsworth’s connection to the underworld is and what's in store for his wife, Jamie Stillingsworth.
The twists and turns riddled throughout The Possession is but a mere prelude to the abundance of true-to-life connections in human history as it relates to the Divine Drama and the, actual, war of the angels. Within this popular book, I painstakingly merged history and intricately tied it firmly to the prose. Though entertaining, the book is but scattered pieces of a grand story that no writer has ever attempted to tell—the orthodox meaning and purpose behind the infamous Codex Gigas—the Devils Bible.
What motivated The Evolution of the Patron Saint, book #1 in the Conspirator’s Odyssey series is our nation’s redundant reliance on the overwhelming amount of selective Intel that has been spoon fed to we the people for over 50 years concerning the assassination of President John F. Kennedy.
There has been a lot of speculation that Kennedy had all the cards stacked against him, which was absolutely true. The Cubans wanted him killed for the failed Bay of Pigs invasion. The U.S. Mafia wanted him killed because Kennedy’s brother was on the warpath for them. The F.B.I. boss Hoover wanted him dead as he supported the black minority in the United States. The C.I.A. did not like him after Kennedy sacked their boss. And on the U.F.O. situation—Kennedy was about to blow the whistle—they had to stop this disclosure. Then there was the Chinese/Russian connection. At the end of the day there were so many powerful forces working against him that it was [looking back on it now] almost impossible to stop what happened. And with so many people out to “get him” it was again impossible to pin the killing on any one group or person thus adding to the redundant byzantine reverie by us all as it relates to President Kennedy’s demise.
Our history is truly convoluted concerning the assassination of President John F. Kennedy to which I believe we’ve been purposely steered into this particular state of mind. The perpetrators of JFK’s assassination used this concentrated level of confusion to literally pull the wool over the eyes of the masses as it was simply a war [Vietnam] that was the deciding factor which led to Kennedy’s demise. Before you think to yourself “bullocks”, reflect on the conflict in Vietnam and the unyielding push for its escalation, pre and post President Kennedy’s murder. However, it was the “why” behind the push for war that my discovery comes into play [?]
President’s Truman, Eisenhower, and Kennedy will forever be tied together in history for which the masses will never fully comprehend as Truman gave iron-clad rise to the military industrial complex following the infamous Roswell UFO incident—the strategic trajectory of which eventually led to the murder of President John F. Kennedy. President Eisenhower covertly warned “we the people” on January 17, 1961 in his farewell address to the nation—we just didn’t listen.


Describe your writing in three words.


Do you have specific techniques you use to develop the plot and stay on track?


The only technique I use is to treat my fact-based fiction stories like a journalist would a story they aim to write. My research is thorough and heavy, my sources real and protected, and I follow the evidence I gather like a timeline toward plot development and execution.


Are your characters in the book based on anyone you know?


Was there any research involved in your work?


What inspires me is lengthy and convoluted as I’ve been inspired by many factions throughout my life. The world is beautiful; lending so much to the cause of many artists from all walks of life and artistic shticks. My life has been one marred with complexities I’m literally writing my way through. Though I haven’t perfected this chosen path, I will continue to follow this invisible muse through to the end.....Inspirations are abundant!


Some of my favorites are Rod Serling’s 1959—1964 series the Twilight Zone to The Mercury Theatre’s October 30, 1938 broadcast of The War of the Worlds over the Columbia Broadcasting System radio; where actor Orson Welles continues to frighten the hell out of me. What H.G. Wells created has been a huge inspiration for me. I’ve long been particularly fond the poetry of Emily Dickinson, John Keats, Robert Browning, John Ruskin, Sir Thomas Brown, and the novels of George Elliot, Charlette and Emily Bronte, Stephen King, Rick Hautala, Michael Marshall, Bram Stoker, Mary Shelly, Robert Louis Stevenson, James Patterson, Jack Higgins, S.E. Chase, and Nicholas Sparks to name a few.

Do you need visual media to describe people or places? (Some authors use pics. out of magazines)


I don’t necessarily need visual media, but when marketing, I find that it surely makes an impact.


Do you have a Muse?


I love Valentine’s Day! It’s sort of a delightful added measure in an extremely difficult trifecta I’ve place myself in. You see, Valentine’s Day is on February 14th—the very day I proposed, my wife's birthday is on February 18th, and we were married on March 20th. Being the typical male, I struggle with making sure I never fail in genuinely acknowledging these pivotal dates. Trifecta indeed, yeah? I pulled out all the stops for the love of my life purely to see her smile that lovely smile she smiles. It is no doubt that my wife, Magdiel Kuykendall, is my muse.


Once a character is fully developed do you set them free or do they still dance around your mind?


They continue to dance their asses off!


Is the Thesaurus one of your best writing friends?
Not yes, but hell yes!


Who gets to read your drafts before they're published?


Share with us your biggest hurdles in the writing process?


My biggest hurdle is having patience! I can see the end, but I know that the process is more involved.


Though, for me, the marketing hurdles are minuscule due to I being traditionally published and a marketing campaign is a contracted staple, but I like to be hands on in a way. My hurdle is piggybacking the marketing efforts of my publishers, but they don’t give details pertaining to their efforts, which limits me to putting money into an official author’s website with strong hosting widgets, creating book specific social networking pages, etc. and marketing sporadically throughout.


What project(s) are you working on now?


Currently, I’m working on book #2 in the Writer’s Block trilogy entitled Purgatory. And I’m gathering pertinent US classified Intel as a stepping stone for the next book in the Conspirator’s Odyssey series entitled Origin.


Is there anything else you would like to say to your readers?


Where can readers find you and your book(s) online?


Visit the site where “truth reads through fiction” @ www.thewriterofbooks.com.