CLOUDED BY ENVY by Candace Robinson

I am so excited that CLOUDED BY ENVY by Candace Robinson is available now and that I get to share the news!

If you haven’t yet heard about this wonderful book by Author Candace Robinson, be sure to check out all the details below.

This blitz also includes a giveaway for a $10 Amazon GC courtesy of Candace, The Parliament House Press, and Rockstar Book Tours. So if you’d like a chance to win, enter in the Rafflecopter at the bottom of this post. 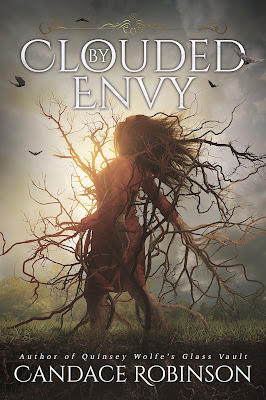 Brenik has always been envious of his twin sister, Bray. Growing up as fairy-like creatures, known as bats, everything came easier to Bray. While Brenik spent his time in her shadows, never feeling he was enough. After escaping their world of Laith, and living on Earth for ten years, Brenik attempts to strike a deal with the Stone of Desire to become human. Though true humanity is not an option, he will accept the curse that will alter him to get as close as he can.

Living in a tree trunk for the past year hasn’t been easy for Bray, more so after her brother disappears again. When a human boy and his brother, Wes, find her, a new friendship is struck. Through Wes, Bray learns there can be more to life than waiting within a tree. But worrying over where Brenik has vanished to always remains in the back of her mind.

When Bray reunites with Brenik, she realizes she must help him break the curse after she discovers the need for blood is beginning to overpower him. The curse not only damages those who get close to Brenik, but it could also destroy whatever is blooming between Bray and Wes.

Exclusive Excerpt!
Bray wasn’t sure how long she had drifted off for, but there was a puddle of wetness against her cheek when she woke up—okay, so it was only drool from herself. Lifting a hand up toward her cheek, she swiped the saliva away and rubbed it on to the hammock. Classy, she thought, but there was already some gathered there anyway.
Remembering the events from earlier, Bray headed straight to the hole and peeked out. She shifted her head from left to right. Nothing. Bray looked up and down—she could see a few bushes had already been planted in the dirt.
Then she saw it: a circular stone bowl filled with water sitting on top of a long thick stem, attached to a circular bottom. A birdbath! Almost giddily, Bray stepped on the ledge of the hole and leaped off, flapping her wings hurriedly to the nearest pink and yellow peach. Opening her jaw wide, she bit into the thin skin. A juicy one. The fruit filled her mouth with delicious pleasure, and she took one more long bite before diving down to the birdbath.
The top of her newfound treasure was a perfect circle with tiny mounds around it resembling hills. Bray landed on the ceramic and bent down to take a seat, before placing her bare feet into the warm water that had been perfectly heated from the shining sun.
Peering down at the clear water, Bray saw no sign of intrusion from other creatures yet. She rotated her head in every direction, as if she would be caught just by thinking about slipping into the water—still no sign of life.
Flicking her braid over her shoulder, Bray pursed her lips together to hide the smile aching to shine against her face and jumped into the water. The splash echoed. Her bare feet scraped the rough bottom, while her dress inflated and then clung to her body as she shot to the surface. She let out a small giggle to herself. It was sad that the only highlight of the past year was hopping into a shallow pool of water with no one around except for her.
She leaned back into the liquid, letting herself float and moving her arms slowly up and down, while swimming in figure-eight circles.
Bray closed her eyes and let the water cover her ears, so it felt like nothing in the world existed, except for the muffled vibrations from the liquid.
A loud booming sounded from above, and her eyelids thrust open, meeting dark brown eyes, light brown skin, and that black bowl hair. Tiny human. Luca.
Freeze, Bray thought to herself, not even blinking her eyes. She held them wide open, thinking he wouldn’t notice her, or maybe he would just assume she was a bird. Even though he was staring at her and had spoken something she didn’t hear clearly.
Nope. That isn’t going to work. He hovered closer, his eyes scrunched halfway closed to examine her more thoroughly. Unable to hold her eyes open any longer, Bray blinked several times.
“What are you?” he asked, genuine amazement creeping into his words, lips slightly parted.
“A bat!” Bray yelled, and she jumped up from the warmth of the water, darting straight for the tree hole.
Breathing heavily, Bray landed inside and collided with the floor. She rolled to her back, running both hands down her face. “Why did I come out without paying attention? I know not to!” Ruth had always told her this.
A quake trembled through the tree, causing shivers to run up and down her spine. What is the little beast doing? Oh no, what if he is trying to chop down the tree? My home—the peaches! Bray didn’t know why she was thinking about stupid peaches when there was another fruit tree directly next door.
Despite the thunderous rumbling, Bray grabbed the needle from underneath her hammock and dodged toward the window. If the little beast thought he could take her down, then he had another thing coming. She would prick his eye—actually, she would poke both of his eyes to protect her and Brenik’s home.
When Bray reached the edge of the window, the sound stopped. She peeped her head out of the hole, right as a face met hers, his black hair falling forward over a hazel eye—an eye she was going to poke. Startled, she jumped back instead of toward him.
A broad smile crossed the little beast’s face. “Hello.”
Freezing once again, until she remembered that the staying-still-as-a-statue strategy didn’t work in the birdbath, she meekly said, “Hi.”
Bray brought the needle up toward his smiling face, just in case.
“Are you planning on sewing something?” He tilted his head at the needle.
“Yeah, your eyeball.” She gave him a hard glare.
“What?” he asked while laughing hysterically.
He was laughing? Not scared? Bray brought the needle closer. “Yeah, you need to leave and never come back. This is my home.”
“No. Technically, it’s my brother’s home,” he said, still smiling.
“What brother? You mean your dad out there who was planting this morning?”
Luca shook his head, and she didn’t miss the wince before he spoke. “No, that’s my brother, Wes. I don’t have a mom or dad.”
Crestfallen, Bray lowered the needle. “Oh. Me neither. I only have a brother, but he will be gone for a while.” She paused and glanced at the note Brenik had left behind, her chest tightening. Then she shrugged it off and shifted her gaze back to the boy. “By the way, my name is Brayora, but you can call me Bray.” For some reason, she wasn’t worried anymore about the human.
“I’m Luca Duran.” He plopped his thin fingers on the edge of the hole.
“Yeah, I heard your name this morning, little beast. I mean, Luca.” She thought little beast suited him better than Luca. 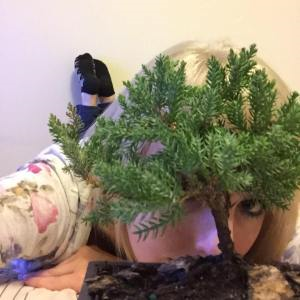 My name is Candace Robinson. I’m just your average hemiplegic migraine sufferer. My days are spent writing, book reviewing and traveling through books for my blog, Literary Dust. I live just outside of Houston, Texas, where it feels like the hottest place on Earth with the crazy weather. No, seriously, one day it’s 30 degrees and the next it’s 70 degrees! I live with my husband and awesome daughter!

You can also follow me on my review blog Literary Dust