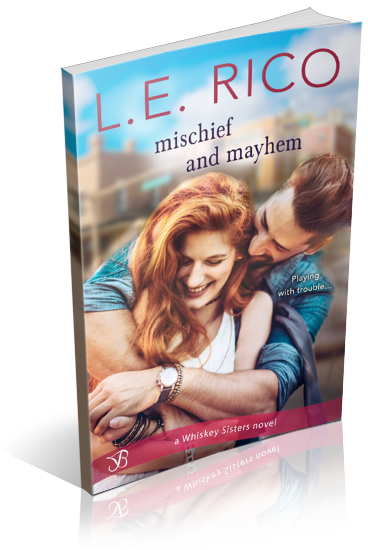 GoodreadsWelcome to Mayhem, Minnesota, home of the Knitty Kitty, The Little Slice of Heaven Pie Shop, and O’Halloran’s Pub—owned by the four young women known as The Whiskey Sisters.

In the wake of her divorce, Jameson O’Halloran has gone man-vegan. And this is one diet she’s determined to stick with. Even when her long-lost ex-brother-in-law shows up looking like two scoops of double dutch dipped in chocolate… She’s not giving in. Been there and still wearing the messy T-shirt.
It’s been a decade since Scott Clarke left his family and his hometown, never to return. But when tragedy strikes, he finds himself dragged back to the land of gossip, judgment, and the one woman he absolutely, positively, without a doubt can never have. His brother’s ex is off-limits. He just needs to keep repeating that to himself until it sinks in.
Each book in the Whiskey Sisters series is STANDALONE:
*Blame it on the Best
*Mischief and Mayhem

Author Bio:
L.E. Rico didn’t set out to be an author. In fact, she’s made a name for herself as a classical music radio host—doing her best to make the music and the composers relevant by putting them into a modern context. It was just a few years ago that she discovered a passion for writing that blossomed into an entire novel. And then another. And another. And, while she still spends plenty of time on the radio, telling the stories of the great composers, she spends even more time composing her own great stories.

I love the Midwest. How did you pick Minnesota to be the location of the Story?
L.E. (Lauren): My primary career is as a classical music radio DJ and when I was in my late twenties, I had the chance to work for a nationally syndicated service called Classical24—which
happened to be based in St. Paul, MN. Even though I’d lived all over the east coast, I knew the Midwest was a whole other world, so I was pretty scared when I got there. But the Minnesotans welcomed me with open arms and helped me weather (pun totally intended) my first winters, buying and maintaining my first house and my ongoing struggle with depression. I had friends almost immediately and was totally enamored of the quirky, cool community around me. The polka mass at the local Catholic church, the obsession with hotdish, and the state fair—where everything is on a stick and Princess Kay of the Milky Way reigns supreme, were some of my favorites. Honestly, had I not met my husband and moved back to New York, I’d probably still be there now!

Was it always your intention with this book to do it about a sister and then two brothers?
L.E. (Lauren): Yes. We first see Jameson in book one, Blame it on the Bet and it’s clear that her marriage to Win is in trouble. Knowing that her book would be next, I was already concocting scenarios for her to find love after divorce and by having someone who’s been away for so long, I was able to use him to reintroduce the readers —who may or may not have read Blame it on the Bet—to the whacky town of Mayhem and its quirky residents. Plus, I knew it would make Win craaaazy! And that’s always a bonus :^)

Was it always your idea to have different issues like stroke, adoption, working in foreign countries a part of the story or it just came as the story flowed?
L.E. (Lauren): It all came as the story unraveled under my fingers. My characters often tell me what their stories are, believe it or not! I start off with a very basic idea of who they are and then the events just kind of unfold.

Adoption played into this story. Was that something you researched or did you know someone who went through that?
L.E. (Lauren): I have two uncles who were adopted—the youngest of whom is two years younger than me. He and I grew up more like brother and sister and we’re still very, very close today. And, while I didn’t purposely set out to write a story about adoption, it was easy to paint that kind of attitude that we were raised with—family is family is family, blood or not. In the case of my elder uncle, my grandparents had to fight for him when, mid-adoption, a “white” family was interested in taking him (my grandparents are Latino). Those were totally different times—even though it was just in 1961—and it was a battle but they never backed down. So this idea that Big Win and Marjorie would do whatever they had to do to adopt that child and keep him—and his identity—safe wasn’t foreign to me.

Was the county fair always part of your original story?
L.E. (Lauren): Ohhhhhh yeah… I’ve never seen anything like the Minnesota State fair. The food is all deep-fried and on a stick, the rides are amazing, there are people walking around in bee costumes for the honey judging. And, of course, there’s Princess Kay of the Milky Way and her royal court— the inspiration for my Princess Mary of Midwestern Dairy. They really do make a butter bust of her! How could I NOT include that?! Although, I have to admit that the float catastrophe was all mine.

Do you have a process that you come up with when you are choosing names and personalities of your characters?
L.E. (Lauren): I’ve run through most of the guy names I like so I sometimes use a name generator for help with that. I’ve got a ton of girl names, though. Sometimes I consult a baby names book. The personalities just kind of unfold as I write. I had a good idea of who Jameson, Win and Big Win were based on Blame it on the Bet. Scott was a mystery to me—I had to figure out what it was about him that kept him from coming home and confronting his past for a full decade. Oh, and then there’s little Jackson…God help us all. He was the most fun of all! I’m at a loss for what I’ll do with him as he gets older in the upcoming books!

Do you use daily events sometimes as your inspirations?
L.E. (Lauren): Oh, sure, all the time! The character of Bryan, Hennessy’s boyfriend, is basically me when I first moved to Minnesota. I was the fish out of water—especially when it came to things like winter preparedness and regional foods like lutefisk (yuck!) and cheese curds (yum!). But more than events it’s people I know who inspire my characters. Janet Lahti, the pie-making mystic is actually an aunt of mine. She’s a bit of a psychic and has had some really spooky occurrences over the years. Julie Freddino, aka The Knitty Kitty, is a girlfriend of mine who took up knitting and gave me a pussyhat last year. It gave me the idea for her business and she picked out her own purple hair.

Did you always have big Win getting sick at the beginning in your draft?
L.E. (Lauren): Oh, yeah. In the absence of the late “Pops” O’Halloran, Big Win is the paternal figure here. So when his life is in serious jeopardy, it’s a crisis that sucks them all in—the sisters, Win Jr, Scott—even Jackson is effected by the fall of his “goppa.” So it’s a good thread to bring them all together in shared fear and stress and grief. And with his life on the line, it was an opportunity for me to explore the kind of man he’d been when he was younger—when Scott and Win came along. It was also a chance to really see his incredible strength and the love that comes with that.

Was that scene considered the hook to the story?
L.E. (Lauren): I’m big on starting things right smack in the middle so that the reader is immediately thrown into the deep end. And that image of Big Win on the floor with Jameson giving him CPR and little Jackson wailing in the background—well, it doesn’t get a whole lot more high-stakes than that.

When you began to write this book did you know it was going to be a romance and a mystery?
L.E. (Lauren): Bringing Scott home was easy—his father’s health crisis put him in an impossible position. He had to come back. But that begs the question—if he’s such a great guy, why did he leave in the first place? So, yeah, it was kind of a mystery for me as well while I sorted out what kind of demons might make someone run away from their family—from their life—for a decade.

When do you know that the time in the story calls for humor, like the float scene at the fair?
L.E. (Lauren): Honestly, I didn’t even know I was funny until the reviews came in for book number one—Blame it on the Bet. So it was pretty scary approaching Mischief and Mayhem thinking I HAD to be funny. But I found my way. There were a couple of early drafts that were just way too dark and my editor helped me find my way back to a more lighthearted, funnier place—like Princess Mary showing up at the pub and the iguana on the plane. Of course, there’s always going to be something around the Knitty Kitty. But, yeah, that float scene—it was totally organic and it STILL cracks me up!

If your book was made into a movie who would you have play…
L.E. (Lauren): Yikes! This is always tough for me…

What song or songs best describes your couple or book as a whole?
L.E. (Lauren): It’s the theme song from the prologue through to the epilogue—with a generation in between:

“Make You Feel My Love” – Adele

What is your next project and when is due out?
L.E. (Lauren): I’ve just released a new, non-Whiskey novel, Counterpoint about two concert pianists who bond over a tragic past, a dismal future, and their love for one another.
2019 will also see books for the remaining two sisters, Walker and Bailey.