Psalms 35:6
Let their way be dark and slippery: and let the angel of the Lord persecute them. 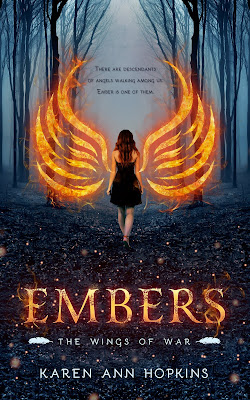 READ FOR FREE ON KINDLE UNLIMITED!

There are descendants of angels walking among us. Ember is one of them.

Embers is an epic paranormal adventure/romance about a seventeen year old girl who discovers that she's immune to fire and any other injury when she’s in a horrific car crash that kills her parents. Following a violent episode with her aunt's boyfriend, Ember flees Ohio to live with an old relative in the Smoky Mountains of Tennessee. Ember's exuberance at escaping a bad home life soon turns to trepidation when she learns that she's a Watcher, a descendant of angels.

While Ember is instructed about her heritage and the powers that go along with it, she strikes up friendships with two teenagers who live in a frightening walled compound in the forest. Inexplicitly drawn to one of the young men in particular, an impossible romance develops. But it's cut short when Ember discovers that her new friends are fighting on the opposite side of a war that's been raging between two factions of Watchers for thousands of years. When the compound’s inhabitants threaten the townspeople, Ember takes action, sealing her fate in the ancient battle of good versus evil, and the grayness in between. Ember is up to the challenge, until she realizes that she isn’t only fighting for the lives of the locals and the souls of her new friends. She may be one of the few champions willing to make a stand for all of mankind as the rapture approaches and the end of days begin.

Embers is the first novel in the dark and gritty YA paranormal romance series, The Wings of War.

“An impending apocalypse provides a compelling backdrop for romance in this page-turning first installment of a new YA series. Hopkins expertly weaves her plotlines together in this compulsively readable teen romance story…Hopkins delivers many successful elements of young-adult romance—appealing lead characters, high-voltage chemistry, repressed sexuality—which will win her ardent followers." Kirkus Reviews

“Embers is the start of an action-packed paranormal YA series. Ms. Hopkins draws the reader immediately in with her richly drawn prologue that introduces the lurking evil in a breath-taking manner. A must read for YA, paranormal, fantasy and suspense fans. Make that a delight for any reader!" Morgan Stamm, Ind'Tale Magazine 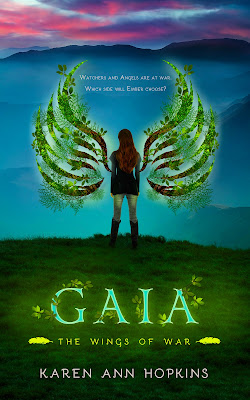 Watchers and Angels are at war. Which side will Ember choose?

Humankind is on the precipice of the apocalypse.

As the Demons grow bolder and the walls between the planes of existence weaken, Ember is forced to develop her powers as quickly as possible, and she seeks out a powerful earth Watcher to continue her supernatural lessons. Her glimpse of the future demands she fight the dark forces spreading across the earth.

But her new mentor has his own agenda, making her question everyone and everything she ever trusted.

When Ember is thrust into the world of the Watchers, she learns of their plans—ones that defy the scripture and make them enemies of the Celestial Host. Ridding the world of evil gets complicated when it becomes impossible to take sides.

As Ember struggles with morality, she soon discovers that there’s something more frightening than anything she’s faced before. 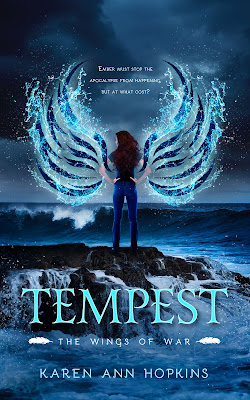 Ember must stop the apocalypse from happening, but at what cost?

The Angels of destruction have arrived, and only Ember stands in the way of their mission to carry out God's wrath and annihilate His enemies.

When the barrier between celestial creatures and humans beings is broken and Angels descend to Earth, Ember soon learns there's a fine line between good and evil. As she faces a world full of monsters and magic, a terrifying darkness rises and threatens to destroy everything she's fighting for.

In the riveting third installment of The Wings of War series, Ember and her friends embark on an epic journey, where unlikely allies are forged and age-old beliefs crumble to dust. And just when Ember accepts love in her life, it's ripped away from her in the most terrifying way possible. 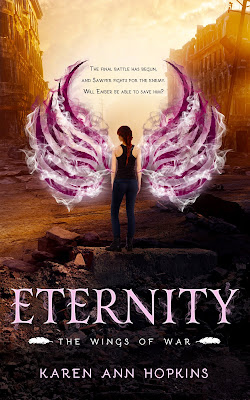 Lucifer has broken free from his bonds as the Angels gather their armies for the battle of Armageddon. Ember and her friends must tread carefully as they unravel the truth about the final judgment and the chaos that is coming. Can they stop the apocalypse from happening? The battle between good and evil isn’t as straight forward as Ember had hoped, and now that her lover fights for the enemy, does she even want to take part in the war to come?

Eternity is the breathtaking conclusion of the epic Wings of War Series, where loyalties will be tested, lives shattered, and prophecies fulfilled.

About Karen:
Karen Ann Hopkins resides in northern Kentucky with her family on a farm that boasts a menagerie of horses, goats, peacocks, chickens, ducks, rabbits, dogs, and cats. Karen’s main job is home schooling the kids, but she finds time to give riding lessons, coach a youth equestrian drill team, and of course, write.  She was inspired to create her first book, Temptation, by the Amish community she lived in. The experiential knowledge she gained through her interactions with her neighbors drove the story of the star-crossed lovers, Rose and Noah. Their story continues in Belonging, where their families and cultures threaten to tear them apart, and with Forever and Deception, where we find out once and for all if love is enough for them.

​Lamb to the Slaughter, the first book in Serenity’s Plain Secrets, is Karen’s newest Amish endeavor, opening up the darker, grittier and more secretive lives of Amish society. It’s a story about the intertwining lives of three unlikely people in an Indiana Amish Community and the devastating results when a rebellious teenage girl is found shot to death in a corn field during the harvest. Serenity Adams is the newly elected young sheriff in the rural town of Blood Rock, and besides dealing with the threatening behavior of her predecessor, she now has a dead Amish girl on her plate.  At first glance, the case seems obvious. The poor girl was probably accidently shot during hunting season, but when the elders of the Amish community, and even the girl’s parents, react with uncaring subdued behavior, Serenity becomes suspicious. As she delves deeper into the secretive community that she grew up beside, she discovers a gruesome crime from the past that may very well be related to the Amish girl’s shooting. Serenity enlists the help of the handsome bad-boy building contractor, Daniel Bachman. He left the Amish when he was nineteen and has his own dark reasons to help the spunky sheriff solve the crime that the family and friends who shunned him are trying desperately to cover up.  Serenity’s persistence leads her to a stunning discovery that not only threatens to destroy her blossoming romance with Daniel, but may even take her life in the end.

​Karen’s YA paranormal/urban fantasy series, the Wings of War, is an epic story about Ember, whose normal life ends abruptly when her parents are killed and she discovers she’s a descendent of angels. Still coping with her strange powers, Ember finds herself — and her heart — in the middle of a centuries-old war in this “compulsively readable” novel (Kirkus Reviews).

​Karen grew up about a mile from Lake Ontario in Upstate New York.  She was bitten by the horse bug at the age of five, and after diligently taking riding lessons for several years, was rewarded with her first horse at the age of eleven.  The feisty horse’s name was Lady, a Quarter Horse-Thoroughbred cross, who became Karen’s steadfast companion.  Through the years, the constant force in her life was horses.  Eventually, she found her place as a riding instructor herself.  Before accepting her fate in the barnyard, she worked a short stint as a paralegal, traveled abroad, and guided tourists on horseback riding tours in the Smoky Mountains of Tennessee.

Karen is currently working on her bestselling Amish mystery series, Serenity's Plain Secrets, along with the YA paranormal/fantasy series, the Wings of War. Karen is also excited to announce there will be more books in the Temptation series.

book series, open to US, Canada, Australia and Great Britain.