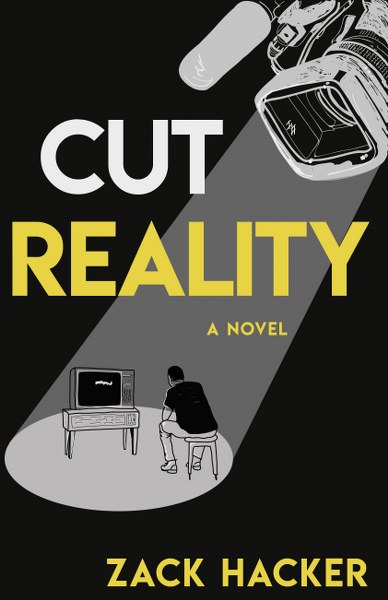 When the specter of death comes to reality TV, who's to blame?
​After a reality television competitor dies during filming, it sends the cast reeling. Follow Jason Debord as he takes on the role of amateur detective to gain clarity into the death of a reality TV co-star and ends up uncovering criminal conspiracy.

When Jason returned home from competing on Beached, he'd lost weight, couldn't sleep, and felt more alone than ever. But he expected those changes. Jason had no way to predict that one of his fellow competitors would fling himself from a cliff. Unless he didn't. Jason can't believe it, but the network presents coverage of the alleged suicide to the world.
Seeing motive in every crew member's movements, Jason compiles evidence of conspiracy, only to be met with resistance from the cast and network alike. He persists only through the support of his developing relationship with Blake, a psychologist who observes alarming similarities between her patient and her partner. Events in Cut Reality have a variety of interpretations. Ultimately, Jason has to decide while under the watchful eye of the public: is his understanding too coincidental to be believed, or so shocking because it's his new reality.
​
Zack Hacker's debut novel will please fans of reality television and psychological thrillers alike. If you enjoy Survivor, Big Brother, The Amazing Race, MTV's The Challenge, or other works of character-driven suspense, don't miss this highly anticipated release.

PROLOGUE
Jason closed his eyes to get a break from surveilling the woman in 31E. He should have felt more comfortable than he had in over a month. No videotapes, no microphones. The show was over. Instead, he was aboard a twenty-five-year-old
aircraft with a discount airline, traveling 500 miles per hour at an altitude of nearly 30,000 feet.
He never asked the producers how bodies were returned to their country of origin. He imagined Billy's body propped up next to his luggage in the cargo hold.
The woman dug her index finger against the side of her cup, forcing the cheap plastic to buckle with a small crack. She was no threat to Jason, and, thanks to the jet engines, he could barely hear her nervous crinkling.
Or, was Billy buried on the island? No, they would have cobbled together a ceremony or at least mentioned it to the cast.
After a few dragging moments, Jason sighed and opened his eyes again. Sleep would not come.
Nervousness was contagious.
She was now shaking the ice in her cup before chewing it.
Piece by piece.
Jason glanced around to see if anyone else was stirring, but the flight had been long and smooth.
He pulled his journal out of the netted seat-pocket in front of him. The book fell open from creased memory to the end of the last entry Jason had made, and he flipped the page back to the entry's beginning.
I should have seen this coming instead of worrying about what food I missed the most. This experience really skews priorities. I guess that's what happened to Billy. The signs were there, but I can't wrap my head around it. He was my closest friend out here. I needed to be there for him, and so did the producers. I think I'm to blame. I can't believe he did it.
And what can we do now?
His jaw clenched. Jason had to stop. Reading the words was harder than he had thought it would be—unavoidable words that he had written and could no longer face.
By the time he reached the end of the last entry from his time on the island—a mere page, front and back—tears had accumulated in the corners of his eyes, but he didn't wipe them away. He sat there, glazing over. Numb but alert.
The soft tone of the seatbelt lights illuminating cut Jason's trance short.
He tore the page out of the journal, careful to rip as close to the binding as possible so the page left no trace. His hands,
however, were still too unsteady to pull this off.
"Fuck," he swore under his breath.
He took the page, now removed from the journal, and folded it first vertically, then horizontally. Stray sand littered the floor as he removed his sneaker. The sole was burnt from sitting too close to the fire and the shoe-string had been tied together after it had snapped.
Jason considered the pairs of Vans he had worn to shreds. A white pair he abandoned in London after he and Blake stayed out all night, walking in the rain. A brown pair that he had worn to run a 10k with his more fit friends while finding out in tedious detail that they were inappropriate footwear; and another brown pair he had to throw out after he wore them canoeing in Puerto Rico on a trip with friends to celebrate Blake's completion of her Psy. D.
Here he was again, with another wrecked pair of canvas shoes. These were black, and probably in the worst state of any pair he had owned. But, these would be saved, not thrown away. These were his island shoes, subjected to weeks of sand, sea, sun, and sweat. As unique as those other memories were, these were more significant. Maybe they'd go on a shelf, preserved in a box in the attic, or maybe he'd eventually sell them on eBay.
The shoe felt tacky and damp in his hand. Jason pulled back the insole, feeling more sand and grime come with it. He laid the folded paper underneath the remnants of cushion. To his relief, his writing vanished into the shoe. The paper was unnoticeable, and he was confident it would stay hidden until he could discard it later.
He slid the shoe back on with little effort. Jason returned his focus to the journal. As he opened the book, this time to the
beginning, the stranger sleeping in the adjacent seat snored. Jason again glanced around. Even the ice-cup lady seemed to be asleep. To be the only person awake on a plane didn't feel eerie.
He analyzed every entry, page, and word—trying to figure out what Blake would think of it—what anyone would think of it.
Through his writings he relived the most traumatizing parts of the last month of his life. Fending for himself on the island,
competing against thirteen strangers, being filmed non-stop.


Now he was returning, but he needed to decide how to tell the story. The show, the network—they would have their story, but he needed to have his. If he was to share the entries he had made in his journal while on the island, then they needed reviewed. Guaranteed to be safe. Unlike the last page, now in his shoe, which no one would ever read. That story was his.

Zack Hacker was born in Cincinnati, Ohio, where he currently teaches English and Creative Writing. He is a graduate of Mount Saint Joseph University and received his M.A. in English from Case Western Reserve University. He lives with his wife and three cats, watches too much reality TV, and plans travel experiences. Cut Reality is his debut novel.