If you love Contemporary Romances with relatable, flawed characters who are sometimes wounded or broken and eventually find that kind of love we all dream of, you'll love this series titled after some of the greatest love songs of all times.

Unchained Melody ~ Pamela Landers had it all, a senior partnership with a top law firm, expensive car, and a luxurious condo. What she desired most was a loving husband, children and a life filled with precious memories that would comfort her through her golden years. Funny how fate has a way of steering you down that path where dreams really can come true. When Pamela encounters Gavin Templeton along her journey, she has some life-altering decisions to make that eventually lead her to happily ever after.

Strangers In The Night ~ What happens when two strangers meet in a crowded bar on a Caribbean vacation and one is disinterested, while the other is totally intrigued? Fate happens. Only one role will play out in the end. It will lead to either a happy ending, or simply a chance meeting tucked away in a memory book. John Rinaldi, doesn't want to be just a memory. He's determined to win the heart of the beautiful and elusive, Samantha Michaels. She not only captured his interest, but she proves a woman he's determined to have in his life forever. She just doesn't know it yet.

For Once In My Life ~ Christina Morandt spent most of her young adult life perfecting her talent and then performing worldwide as the prima ballerina for the Savannah Ballet Theatre. When she decides to retire at the peak of her career, she returns to Savannah to open her own dance studio and settle into a life of comfort and solitude.


Captain Garret Rickford is a seasoned Apache helicopter pilot for the U.S. Army, who is awarded a head instructor position at the Hunter Army Airfield in Savannah, Georgia after serving four tours carrying out assault and rescue missions over Iraq and Afghanistan. He returns home, while secretly battling the haunting traumas of war and the death of his dearest friend and fellow comrade. She was raised on a horse ranch in Wyoming. He was raised in the Highlands of Scotland. They were opposites in so many ways, each never expecting to cross paths with the other. But, they did, and when the spark of attraction ignited, there was no extinguishing the passion once it began to flame out of control.

Creating romantic fiction has been a passion of mine, ever since I was old enough to understand the connection between the sexes.  I think I was twelve, when I wrote my first love story and like most young minds; I truly thought it was a masterpiece.

There’s another masterful connection that has been going on now for centuries, and that, is the one between music and literature.  There is a full alphabet of songs that have been written retelling a work of literature as far back as the 18th century.

“If I Die Young” by The Band Perry was based on a poem, Lady of Shallot.  “Love Story” by Taylor Swift is loosely based on Romeo & Juliet.  The artist Sting’s “Moon Over Bourbon Street” was based on an Anne Rice Novel, Interview with A Vampire.

More interestingly though, is the anatomy of a song and how it has within its lyrics a pretty fascinating back story as well.  For more than five decades, authors have been creating fictional pieces and bringing readers deep inside the lyrics.  I grew up listening to my mom’s collection of romantic ballads from the 40s, 50s, and 60s.  Those lyrics have forever been embossed into my brain, I still sing along whenever I hear them.  Lyrics like those back then told a story, and they were so strong, and emotional, their affect were everlasting.

I have a library of love songs on iTunes I listen to religiously, while I write, as a source of inspiration and a tool that gets me in the mood and mindset I need to be in.  It is from this list, I began to formulate a series of ideas, followed by cryptic notes on paper, and finally the creation of my Love Song Standards Series.  I made a list of the songs I connected with personally, whittling it down to thirty-five.  That number was quite overwhelming, and I thought virtually impossible to create that many scenarios.  So, I chipped away at the songs and their lyrics, until I decided on a top ten.

I had made a commitment to myself to finish one book a month throughout 2016, writing a chapter every day, leaving me ample time to polish and edit each one.  I knew from the on-start, what I wanted my covers to look like.  They had to resemble each other in a way that would tie them together, but strong enough for them to stand on their own.  My designer Covers by Ramona did an exceptional job tying all my ideas together.

After Book 6, Chances Are, was completed, my brain was fried.  I took a short reprieve and switched it up a bit with a Romantic Suspense, A Pawn for Malice.  Happily, the first two books of my series received a 5-Star Readers Favorite Award, which ended my promotion efforts.  I was forced to take an extended break due to personal issues that had set me back both physically and emotionally.  My focus now, is to both promote my series and finish the final four titles All The Way, It’s Impossible, Sincerely, and Unforgettable.

If you’re a lover of contemporary romance, please do check out my Love Song Standard Series.  I’m launching a Boxed Set of my first three titles for just $2.99.  Buy links for Amazon, Apple, Barnes and Noble, Kobo, and Smashwords are available on my website at RomanceAuthorCynthiaRoberts.com
Hugs from me to you.

" This is definitely a novel that I would read again. It is going to stay on my bookshelf for a very, very long time."  —Readers' Favorite

My love of reading romance fiction goes back to those early years when I was raising a young family. It wasn't until much later in life, that I actually took up the pen to write and my first historical romance, Wind Warrior was born. I don't fit into one specific genre. When the ideas start to flow, lord only knows what category they'll fit into **wink wink **

I wish I could have gotten to this point in my career much sooner rather than later, but life simply got in the way far too many times. Because of those multiple detours, however, I have become a more passionate and expressive writer and can draw upon those painful moments in my past, when I need to create the kind of raw human emotion I want my readership to feel.

It is my hope you walk away with not just an entertaining read, but the importance in knowing, "Without imagination & dreams, we lose the excitement of wonderful possibilities."

Stop by and visit my Facebook Page at https://www.facebook.com/Cynthia.Roberts.Author/, where you'll enjoy some really cute and entertaining posts on love, romance, and relationships, can subscribe to my mailing list, and be kept abreast of contests, giveaways, special promotions and new releases. Until then, bye for now. 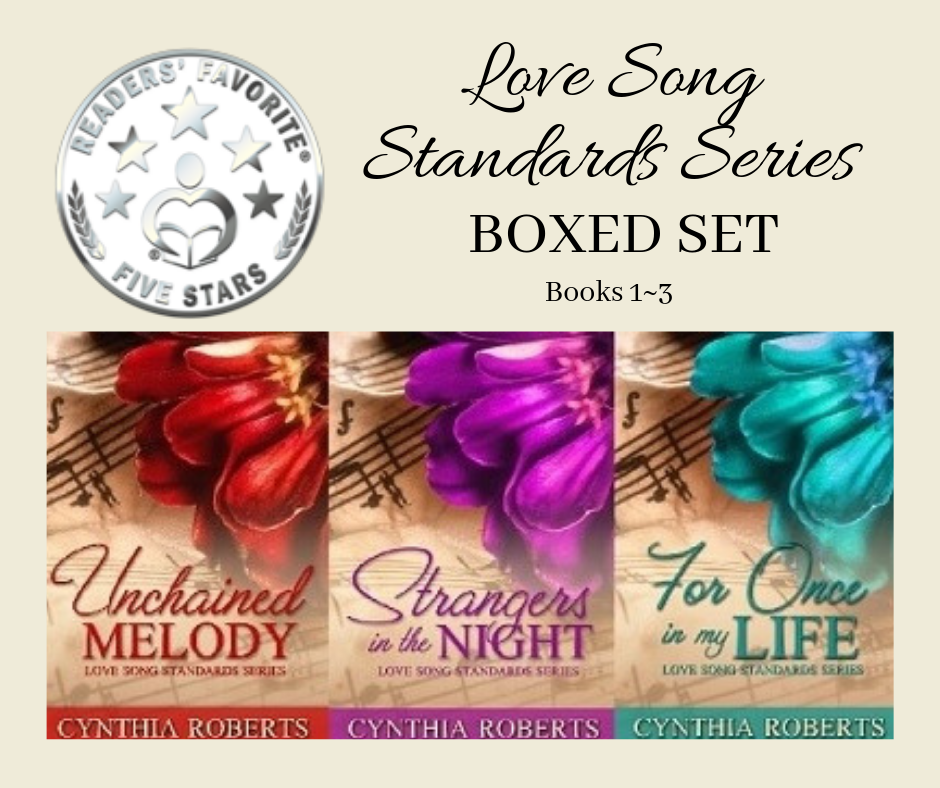