·      I must ask. How did you come up with the corpse in a penguin costume?
You know, I don’t recall any more! The original proposal (called Death in a Penguin Suit, surprisingly enough) had been around since long before I moved to Florida almost thirteen years ago. Though I suspect I must have been triggered by some sports mascot or another.
·      Is Nina Fleet the sleuth in other mysteries?
PEACH CLOBBERED is Book 1 in the Georgia B&B Mystery series which features Nina as our protagonist. I’m currently finishing Book 2 (working title PEACHY SCREAM) and am contracted for at least one more mystery in this series. But I have plenty of ideas for Nina’s further adventures, so I hope we continue well after that.
·      Are your protagonists often women?
Except for my historical romances, which are told from dual points of view, heroine and hero, all my books have female protagonists. Though I’ve written from the male point of view a couple of times in short fiction. But I prefer to write from the female view point, yes.
·      Is Cymbeline, GA. An actual town? If not can you tell us what town inspired the location?
Cymbeline is a fictional town set west and a bit south of Savannah. The original  story was set in East Texas in a small town called Juliette, which was based on a real town called Jefferson, known for its historical homes and antique shopping. But for some reason my publisher thought Georgia was a better setting than Texas, so Juliette became Cymbeline.
·      Are you from Georgia?
I’m actually a Texas native, born in Lubbock and raised in Dallas, though I have been in Florida long enough now to consider myself at least half Floridian. But I’ve traveled to Georgia a time or two and know some lovely people from there.
·      This must be a most comical and entertaining read, The Sisters of Perpetual Poverty. What is the story behind that clever name?
I have to admit I was being a bit silly with the name. But I’m allowed, since I was raised Catholic and was taught by the nuns up until the time I was in fourth grade. So I have huge love and respect for the women who take on that life. And if you do a web search for Catholic nun orders, you’ll see all sorts of interesting names not dissimilar to the name of my fictional nuns’ order.
·      Clever plot twists are part of the book description. What is your formula to  keep the story line quirky and yet believable and entertaining?
I have never considered myself “funny”, nor do I write humor, though I do have a wide line of snark in me (that I mostly try to keep hidden). And since Nina is something of an alter ego for me, I’m able to let it flow through her, resulting in a book that’s somewhat tongue-in-cheek. Besides, life truly can be quirky – just Google “Florida Man” if you don’t believe me – and a cozy mystery gives you a bit more latitude to indulge in that sort of thing. But I draw the line at true silliness in a story…I’m not writing farce.
Best wishes for the greatest success with this and all your books. 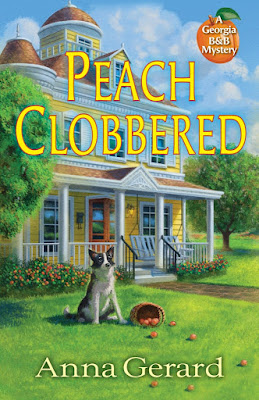 Nina Fleet’s life ought to be as sweet as a Georgia peach. Awarded a tidy sum in her divorce, Nina retired at 41 to a historic Queen Anne house in quaint Cymbeline, GA. But Nina’s barely settled into her new B&B-to-be when a penguin shows up on her porch. Or, at least, a man wearing a penguin suit.
Harry Westcott is making ends meet as an ice cream shop’s mascot and has a letter from his great-aunt, pledging to leave him the house. Too bad that’s not what her will says. Meanwhile, the Sisters of Perpetual Poverty have lost their lease. Real estate developer Gregory Bainbridge intends to turn the convent into a golfing community, so Cymbeline’s mayor persuades Nina to take in the elderly nuns. And then Nina finds the “penguin” again, this time lying in an alley with a kitchen knife in his chest.
A peek under the beak tells Nina it’s not Harry inside the costume, but Bainbridge. What was he doing in Harry’s penguin suit? Was the developer really the intended victim, or did the culprit mean to kill Harry? Whoever is out to stop Harry from contesting the sale of his great-aunt’s house may also be after Nina, so she teams up with him to cage the killer before someone clips her wings in Peach Clobbered, Anna Gerard’s charming first Georgia B&B mystery. 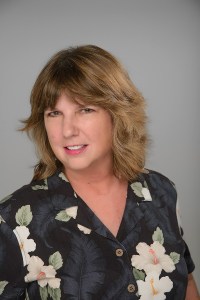 DIANE A.S. STUCKART is the New York Times bestselling author of the Black Cat Bookshop Mystery series (writing as Ali Brandon). She’s also the author of the award-winning Leonardo da Vinci historical mysteries, as well as several historical romances and numerous mystery, fantasy, and romance short stories. The first book in her Tarot Cats Mystery series is FOOL’S MOON, available in trade, large print, and Kindle versions. Her Georgia B&B Mystery series from Crooked Lane Books launched July 2019 with PEACH CLOBBERED, written as Anna Gerard.
Diane is a member of Mystery Writers of America and has served as the 2018 and 2019 Chapter President of the MWA Florida chapter. In addition to her mystery writing affiliations, she’s a member of the Cat Writers’ Association and belongs to the Palm Beach County Beekeepers Association. She’s a native Texan with a degree in Journalism from the University of Oklahoma, but has been living in the West Palm Beach FL area since 2006. She shares her “almost in the Everglades” home with her husband, dogs, cats, and a few beehives.