What inspires you to write?
I wrote non-fiction and text books for years before retiring from my teaching career. I started a part time business creating historical costumes which is a major hobby and interest of mine. Gabriel, the hero from Eternal Lovers, started making himself known to me though my dreams then eventually his thoughts and images began to filter into the daylight hours.
Originally, I thought if I wrote out his story he would “shut up” and leave me alone. I had no intention of seeking publication for his or any other story. I soon became intrigued and captivated by his tales and shared the first “rough” draft with a friend who was an avid paranormal reader. She loved his story and suggested I clean it up and submit it for publication.
While I worked on rewrites and edits for Eternal Lovers another story relating to the seven Ancients began to unfold. Gabriel’s little story turned into an eleven book series and I’m still writing. Allowing him the freedom to express his self and share his stories with me has also opened the door for others to visit me in my dreams, which is where all my stories come from. 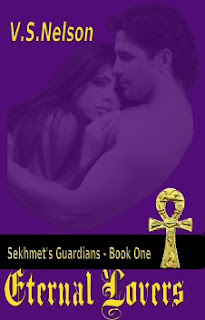