Have you met Agy Wilson ?

This may seem off topic to a blog on art, and I've had people sometimes defriend me in the social cyber sphere because I've got opinions and share them. Okay sometimes A LOT. But that's what an artist does, I think.

Artists, whether they be into music, paint and pixels, words on a page, movement or any other expression are meant to EXPRESS. I'm arrogant enough, I want what I manifest to be worth my time in this place called Earth, so I work hard not just at that whole art thing, but the people thing as well. So this might SEEM off topic, but for me it is intrinsic to art--- especially my art. And this is from someone who is very uncomfortable with feeling and fearful of just about everything. I just work every day to get over it, sometimes more successful than others.

I've said this before, I will keep saying it, because I keep forgetting it. In order to create anything worthy of art, I embrace my fears. Sometimes I'm ham-handed in my efforts, sometimes it takes me a WHILE to get it. But anything worth creating has taken that wrangle and effort. I could say the same for my life.

This was recently brought home to me again, after another particularly brutal time, prior to these events.

I had complained of a hurt a bit ago, because I'd shown up at one of my favorite libraries and received the kind of reception I often get, and dread. In all fairness, it was bad timing, it was a hot day, there was a whirlwind of activity (which is true of most libraries nowadays and they work UNDER BUDGET, most of them are stressed, because they are a dedicated lot. Really, because of my movement around the last few years, I've visited a few libraries and I had been worried about the libraries. Now I'm worried for the librarians. The economic stresses have reached well into their structure and the full time job they used to do they must do in less than twenty hours, and still be gracious to people and meet all the public needs of their job. Usually with less staff. But I digress).

In another life I might have gone off on such a thing (more likely it wouldn't have happened, we would have both been in a much better place). Instead I walked away hurt and vented a little at home and online and felt bad.

When I found an old friend volunteered at the library, I almost didn't go, but I have determined I was going to give people the opportunity to make their interaction with me about something other than appearances. And I needed to confront my fears, again. And besides, I could just ignore the offending person. Except a BUNCH of wonderful things happened. First I found my elder daughter's first teacher worked there. Then my friend came in, and I got to thank her so much for mentoring me when I really needed that beginning push. She encouraged me along the way, and I was able to give her a hug for having missed her for so long.

And that wasn't even the wonderful, WONDERFUL thing. The person who hurt my feelings came up and asked if I illustrated, I informed her that I wrote and illustrated and we'd met. Her whole demeanor sagged. She'd thought she'd recognized me, and she felt horrible for the way she'd treated me and apologized. She wanted to take the time to view what I'd wanted to share before, and the things she said more than made up for the initial hurt. I left the library bolstered, elated and mostly restored.

Except I'd not been gracious and had been extremely defensive. At first I felt exonerated and happy, I'd been right, I really was someone she would find good in and want to have around (have you noticed I love kids and books?!) But it quickly wore off and flattened. I really didn't like the way I'd dealt with her, even if it was still too raw and she'd originally been off to a bad start. Goodness knows I've done that so often. The best is when people could see my humanity and not only forgave me for it, but embraced me. I determined I would not only apologize, and explain to her how it hurt, and that what she did MATTERED. I want to know that about myself, so why not do that for someone else?

Then the truly great thing happened. It was work, hadn't planned on taking the walk, it threw a wrench in my timing, but it was exactly what I needed to do.

In the course of the apology I found we had so many things in common, I had been correct, I'd caught her not only at a bad time on that particular day, but there had been struggles on lots of levels that immediately made me glad I felt the remorse. She told me about an event, that I ended up attending and the speaker was inspirational. The speaker needed help getting her book published, and I'm happy to have met her and hope to help her in her goal.

The librarian was a fount of information, I know she'll help in some of my goals (I want to be able to get my e-books into the libraries, but it's a process, as well as get the word out about my books and efforts). I had an idea for a book I hope to work jointly on with her, because I know absolutely it's a necessary thing, and I have a feeling we'll have a great time working on it.

So what's this got to do with art? Art is about feeling, taking chances, bracing and then embracing your fears,  and then articulating all that so you can take others on a similar journey. Art is about empathy. If your life is not empathic to a certain degree-- how can you hope to make art? That doesn't mean to run out and become Mother Theresa (though we probably could use a few more like her). But it does mean, suspending judgment and ask more questions. Don't take things at FACE value (you'd not talk to me, because truth be told, the thing I hate is people who used to know me wanting to know whatever happened to me-- lack of funds and care darling-- and others dismissing me, because I've lived close to the bone and after 56 years, it shows. I don't need pity but I'll take your empathy and I will return that gift polished and shined).

Doesn't matter how fearful you are, learn and push yourself to live fearlessly, and you will be able to create something that people will respond to. It will make you an artist. I thank everyone in my life good, bad and even the indifferent (you haters, you know who you are!) because you've made me the artist I am.

For those of you who read this and are disappointed, I'm sorry. For the others, live fearlessly (not stupidly, don't do anything that will imperil you!) but by all means let me know if and how it affects what you create.

And now for something completely different, this weeks coloring page... 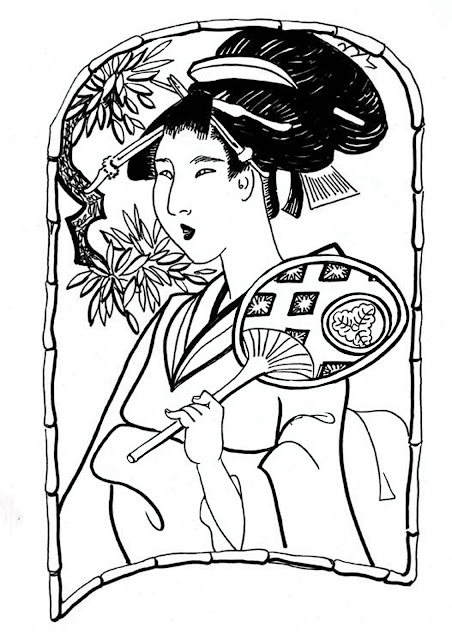 
I love family, art, environment, history, calligraphy and all things language. It's only natural for me throw it into a huge pot and cook up my books. When I'm not playing with kids or pets, I'm usually immersing myself in my work.
www.amazon.com ~ Agy-Wilson ~
﻿