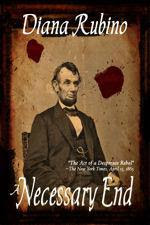 When Booth, under the guise of seeking spiritual advice, visits the President's medium to gather information about Lincoln's habits in order to kidnap him, a malevolent spirit begins to haunt and torment him, driving him to the brink of

insanity. A mysterious coin also appears out of nowhere, and returns every time Booth tries to discard it.
Each return of the bloodthirsty Roman coin brings increasingly terrifying events and eerie hauntings.In the midst of these strange visitations, Booth falls in love with Alice Grey, a beautiful actress who's hired by the government to spy on him. She’s torn between her love for Booth and her duty to protect the President from assassination.It is a 'dark' paranormal because a malevolent spirit haunts Booth to assassinate the 'tyrant' as in Julius Caesar. But since I believe every situation, no matter how foreboding, allows for humor, I've added a few lighter scenes that offer the reader some much-needed relief. How can Booth's plot not leave itself wide open for humor? It was pure comic farce, how he recruited this motley band of adoring disciples and gave them each an assignment in his absurd conspiracy. Yes, Booth sure gets what's coming to him in the end. 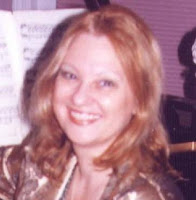 My passion for history has taken me to every setting of my historicals. The four-book “Yorkist Saga” and two time travels are set in England. After finishing the Italian vampire romance “A Bloody Good Cruise” I decided to write biographical novels with no fictional characters. I recently completed “President Washington’s Daughter”, about Eliza Jumel Burr, who made her way up from the streets of Providence to being the richest woman in New York City and wife of Vice President Aaron Burr. My latest work is “Give Us Liberty”, the story of Martha Washington as told by her “favorite servant,” her slave Oney Judge.

I won a Romantic Times Top Pick award for a previous novel, FAKIN' IT, and am the author of 13 paranormal and historical novels. I'm studying for a Master’s Degree in Archaeology, and own an engineering business with my husband Chris. A longtime member of Romance Writers of America’s NH chapter and the Richard III Society.
I'm a golfer, pianist, and sling a mean kettlebell. Fav bands are the B-52s, Stones, Ozzy, and the 60s rock n roll I grew up with. Rock n roll keeps me young! 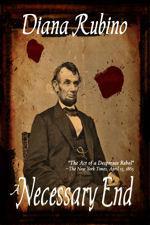 I don’t believe in ghosts, Wilkes assured himself as he listened to the high keening of the medium. He shivered as a draft wafted over him. Smoky incense intensified the gloom. He wasn’t at this séance to seek omens or cryptic guidance from beyond the grave. He was attending this charade to learn of Abraham Lincoln’s future.
He still ached with grief over his boyhood friend’s death. A part of his soul died along with John Beall, who was everything the South stood for. Rage over the betrayal seized his heart and boiled his blood. How could Lincoln do this to another human being? How could the President look him in the eye and promise he’d let John live, then murder him?
Wilkes fought to subdue these emotions. No phantom held the answers he sought on this bone-chilling night, just the bird-like matron entranced before him, Nettie Colburn Maynard. The medium was Mrs. Lincoln’s spiritualist, famed for her evenings at the White House “bringing back” their dead boys, Eddie and Willie. Wilkes had to admit she put on a good show. One thing he appreciated was fine acting. But he was wary. The parlor felt haunted as shadows crept up the walls. The hairs at the back of his neck already stood on end, and a chill slithered through his body. Although his hands were icy, his palms sweated, making them even colder. The room stood silent and musty as a tomb. The dank staleness assaulted him. His throat aching for a trickle of brandy, he coughed.
Mrs. Maynard’s eyes were shut tight. His own gaze darted about, unable to settle. Candles flickered jagged shadows around the room. Wallpaper patterns swirled to impenetrable fog. And the curtains...did they flutter, even though the windows were closed?
“A spirit is present, Mr. Booth.” Her voice, almost a whisper, barely reached his ears. She exhaled feathery tendrils of steam in the eerie half-light. “It watches over you, seeks to guide you.” He felt her shoulders shake with violent tremors. “He was powerful in life, but more powerful in death, released of mortal frailty.”
Wilkes felt the dread of approaching harm, but sat too spellbound to get up and quit the whole thing. He guessed it was raw fear that kept him frozen in his seat. His voice, trained in delivery of lines, was suddenly struck silent. He had to admit she was gifted, the perfect witch for Macbeth. The funereal black dress draped her gaunt figure like a shroud. Shadowed by the pale flames, Mrs. Maynard played her role to perfection. Once again, he convinced himself it was all an act. But if it was real and some being from beyond really did hover over him…
Just then he realized his jaw was tightly clenched. He struggled to slacken it.
“He lived many centuries ago, Mr. Booth, and knew you by another name. He revisits you now, drawn close by your pain and grief. She shuddered again. Her grip crushed his hand, her knuckles white as bleached bone. “I feel his essence very forcefully, right there…” Her hands turned to ice. “Behind you…”
He nearly ripped a tendon snapping his neck around, but saw neither phantom nor flesh, just movement at the edge of his vision flickering up the wall. Threads of fear tickled at his nerves. Nothing was as it seemed. Turning to face her again, he felt foolish for succumbing to her trickery. An embarrassed blush heated his cheeks as the room temperature plummeted. He breathed deeply to calm his pounding heart.
“He will thrust you towards your true destiny, young man.”