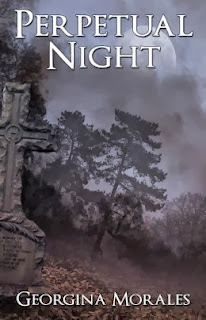 SHADOWS IN THE DARK


he shining moonlight covered every inch of the forest. Lilibeth looked up through the leafless branches and admired the deep blackness of the sky as the perfect backdrop to hundreds of tiny immaculate stars enclosing the full moon. It was a poet’s night. Surrounded by trees, all she could see were woods; breaking the silence, the running water of the Howling River gave up her location. She knew where she was, she had been here many times before; it was the forest behind the White Church’s cemetery, but the real question was how she had gotten here. A cold November breeze blew, and Lilibeth realized with a shiver that she was only wearing her red flannel pajamas.


An owl hoot echoed, and with it came the feeling of not being alone. The hair on the back of her neck rose. Lilibeth imagined eyes on every crook and cranny out of the silvery light reach, and she realized her shivers were not caused by the falling temperature anymore. What had appeared like a peaceful night was changing into a creepy nightmare and hard as she tried to fight it, a foreboding feeling came over her.


Close by, a howl reverberated in the night, scurrying noises of animals became loud, and soon she became aware of how populated the forest was, but it didn’t feel innocent or happy: instead it was menacing and unnatural. Branches snapped under an unseen foot and rustling on the bushes announced a presence to her left. The temperature dropped several degrees and Lilibeth knew it wasn’t because of the season. Whatever it was behind the bushes filled her with a sense of dread. It had no soul and it reeked of despair.


The young girl heard movement once again, and with the corner of her eye she caught a glimpse of a figure blacker than the night. Scared, she spun in the direction of the noise willing her eyes to see in the dark. The shadow darted from an orchard to a tree closer to her; overcome by fear, she prepared to run in the opposite direction. When she turned around, the face of a young woman took her aback. She was so close Lilibeth could feel her breath.


Her terror grew when she closed in on the woman’s features. It was like watching her own reflection: same pale skin, long dark hair and violet eyes, but this other girl was older, and out of her every pore undiluted evil gushed. She opened her mouth to scream, only to see the one in front of her move in flawless synchronization. Lilibeth felt consciousness slip through her fingers. The images started to blur from the edges when two hard objects like rocks hit both her forearms, preventing her from falling. The last thing she saw was that mouth wide enough to disjoint any human jaw.


A loud scream pierced through the veil of night, and she jumped out of bed. It took her a second to realize that the blood-curling scream was hers. To Lilibeth it was like the scream of someone dying; she didn’t even feel it coming out of her mouth. She had never been that terrified before. Come to me, echoed a voice in her mind, beautiful, feminine, like a chant. A cold drop of sweat ran along her spine, and the ominous feeling came back.


Her mother opened the door in a hurry, making her jump once again. The girl was covered in sweat and completely confused. “Are you ok? Was it another nightmare?” asked Mrs. Royster while turning the light on.