Training for flight in life and as a pilot *****

I highly recommend the first volume of three in The Eagle's Last Flight series. Here Skip O'Neill takes the reader on the journey of training for flight in life, love, commitment and of course airplanes.
The book has a retrospective point of view as Skip O'Neill lies dying of Leukemia in a New York Hospital. His struggles with takeoffs and landings help the reader understand the perseverance and endurance of his character. He falls in love with Christy and conquers her heart while striving to conquer control of the cockpit.
I particularly enjoyed the balance between Skip O'Neill's private life and his military aspirations. The scenes where he accomplishes so much by flying F-100s juxtaposed with the daily routine in a life placed me right there, with the exciting and the mundane.
As a pacifist I veer towards books where the hero opposes war, and this very human portrait of a hero who accepts a social responsibility in an era when such was unpopular was a departure that as a reader helped me grow.
The knowledge that the author is himself a decorated retired Air Force Coronel makes for a most realistic read. A well-deserved five stars indeed.

BOOK II The Eagle's Last Flight: Book Two (Vietnam Tested in Combat)
Moral struggles for pilot and wife *****
In Volume two of the series The Eagles Last Flight Skip O'Neill and his wife experience the hardship and sacrifice of Military life in Misawa Air Base in Japan. There is a vacuous moral existence that surrounds them and eventually influences them as the military life is so filled with abuse of pills, alcohol and sexual adventures.
Here the characters manage to be more than most who surrounds them but not without a few stumbles of their own. Skip has a huge experience in which he must eject from his airplane which sets up the scene beautifully for abuse of pain killers.
The story offers the reader a perspective that is sure to make all cheer for the couple to succeed. The relationship struggles in work as well as in private felt very real. Another five star and I am ready for volume three.

BOOK III The Eagle's Last Flight: Book Three (The Final Challenge)
Fantastic finale with twist and turns I did not expect
In Volume three Skip O'Neill struggles with his own feelings and commitment to a war that by now is completely unpopular. At the same time in order to prove himself he takes on the most dangerous missions as if willing to lose it all.
The author here takes us through the perils of war in its full form as well as tragedy and loss where we least expect it. There is a very believable balance between success and failure, joy and hardship in the life of Skip O'Neill.
In such a detailed life of much hardship it is surprising and refreshing that the author finds a way to end on a high flying note. This series should appeal to all audiences, but the subject matter is adult enough that it should be read by 17 and older.
by Ron Standerfer

Ron Standerfer was born and raised in Belleville, Illinois, a town across the Mississippi river from St. Louis, Missouri. While attending the University of Illinois he took his first airplane ride in a World War II-Vintage B-25 bomber assigned to the local ROTC detachment. It was a defining moment in his life. Weeks later, he left college to enlist in the Air Force's aviation cadet program. He graduated from flight training at the age of twenty and was commissioned as a Second Lieutenant. Another defining moment occurred early in his career. In August 1957, he participated in an atomic test at Yucca Flat, Nevada. Standing on an observation platform eight miles from ground zero, he watched the detonation of an atomic bomb code named Smoky. The test yielded an unexpected 44 kilotons---more than twice the size of the bomb dropped on Nagasaki. He never forgot Smoky, and the memory of that experience weighed heavily on his mind when he wrote The Eagle's Last Flight, a semi-autobiographical novel about his life as an Air Force fighter pilot during the Cold War. Ron's twenty seven-year Air Force career spanned the Cold War years between 1954 and 1981. During that time, he flew a variety of high performance fighters including the F-100, F-102, F-105, F-4 and A-7. He flew over 200 combat missions during the Vietnam conflict and was awarded two Silver Stars, thirteen Air Medals and the Purple Heart. The latter was received after he was shot down over Tchepone, Laos in 1969. He retired from the Air Force just as the Cold War ended as a full Colonel after tours in the Pentagon and Tactical Air Command headquarters in Virginia. He continued to pursue his passion for aviation after retiring. He was a marketing director for Falcon Jet Corporation, a subsidiary of the French aerospace manufacturer Dassault Aviation. In that capacity, he was responsible for launching the marketing campaign for the Falcon 900, a long-range business jet. Later, he was an owner of an aircraft charter and management company in Elmira, NY and also a marketing consultant. Ron is a prolific writer and journalist. He appeared on WOR TV in New York City during the first days of the Persian Gulf War, providing real time analysis of the air war as it progressed. His book reviews and syndicated news articles are published regularly in the online and print news media, as well as in military journals. These days Ron and his wife Marzenna, the daughter of a distinguished theatrical family in Poland, spend their time in their homes in Gulf Stream, Florida and Warsaw. 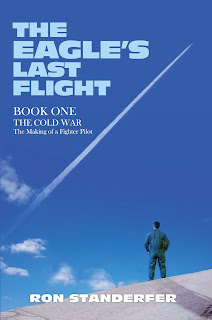 Skip O’Neill lies dying of leukemia in a New York hospital, determined to live until the new millennium. His wasted body shows scant evidence of the man he once was—an Air Force fighter pilot and decorated combat veteran.  O’Neill’s first assignment as a young lieutenant places him among hard drinking World War II—and Korean War—era fighter pilots who quickly teach him their ways. He almost washes out of pilot training but is persistent and manages to graduate. In Vietnam, he proves to be a skillful and courageous pilot who faces dangers of all kinds with equanimity. But the greatest—and most deadly danger—materializes years after O’Neill volunteers to be an observer at an atomic test site. In the end, O’Neill decides that when his time comes, he will dash at it fearlessly. He anticipates being greeted by departed friends—but what awaits him is something totally unexpected.

Skip never forgot his experience at Camp Desert Rock. Years later, he ran into
a Marine at the officers club who had participated in one of the tests and the two of them compared notes about what they had experienced.
‘‘It was the damnedest thing,’’ the Marine said, ‘‘There we were, almost at ground zero. I mean we were sitting in trenches, three miles away. Three miles! Not on some piddley-assed platform eight miles away, like those Air Force and Navy pussies.’’
Skip let that comment pass, based on his longstanding belief that arguing with a Marine who has been drinking, was not a smart thing to do.
‘‘And get this…right after the blast we were supposed to leap out of the trenches so we could be moved up to a point three hundred yards away.’’
‘‘Three hundred yards?’’ Skip exclaimed. ‘‘Why so close, for God’s sake?’’ ‘‘Why? To set up a mock defensive perimeter against anyone who theoretically
might have survived the attack.’’
‘‘Yeah right…like anybody would.’’
‘‘Exactly. When we moved into position, there was nothing to see, much less to defend against. I mean nothing, just a few piles of molten metal here and there. And, oh yeah, the charred flesh of sheep that were used in the test.’’
‘‘Sheep?’’
‘‘Yeah, sheep. There I was with my men, tromping around in this fallout shit…you know…that white ash that crunches under your feet?’’
‘‘Fallout at three hundred yards, that stuff had to be big time radioactive.’’ ‘‘Right, but of course I wasn’t afraid, because afterwards we were gonna get
brushed off with brooms and hosed down. I mean, brooms, man. How dumb could we have been?’’
‘‘Anyway,’’ he continued, ‘‘about the same time, this guy shows up over the top of the hill, all dressed out in some kind of shiny, silver, protective suit with a ventilator and face mask. When he sees us, he comes roaring over, like someone lit a rocket in his ass. What are you guys doing here? Where is your protective gear? He yelled. All the time he’s talking, he’s pointing this Geiger counter thing at us, which is going click, click, click.
I yelled back, we’re just doing some reconnoitering, getting ready to kick some ass.
Well, you guys shouldn’t be here, he replied. Are you crazy?
Well, yeah. I told him. We are crazy. I mean…we’re Marines, which is basi- cally the same thing…right?
It turns out this dude was some kind of technician from the Atomic Energy Commission. They were the guys who were supposed to be running the tests. And, get this…he didn’t even know the military was operating that close to ground zero!’’
‘‘No way,’’ Skip said.
‘‘Yep, and when I got him settled down, I found out that he wasn’t pissed at all. He was just scared…for us. That should have been my first clue.’’
‘‘Don’t take this the wrong way,’’ Skip said, ‘‘but it sounds to me like the gov- ernment was using you guys as guinea pigs.’’
‘‘Guinea pigs?’’ The Marine snorted derisively. ‘‘We should have been so lucky. The laboratory animals they used in those tests were washed down with soap and water afterwards, and their health was carefully monitored. It’s been fif- teen years since that test and nobody has asked me shit about my health. It’s like it never happened!’’
‘‘Or like you guys were expendable, so it didn’t matter,’’ Skip offered
‘‘We were all expendable. You, me, and the 250,000 or so troops who partici- pated in all those years of testing. And that, my friend, is the way it is.