Scott A. Meehan is a retired Army officer teaching at a university.  Scott Meehan was born in Baltimore, Maryland and attended 12 schools, public and private, throughout the United States and South America.
For twenty-five years he served in the U.S. Army as both an enlisted soldier and commissioned officer. In 2005, he retired after serving a tour of duty in Saudi Arabia during Desert Storm and two tours of duty in Iraq where he received a Bronze Star for his actions in 2003-2004.
Scott writes books and enjoy traveling. Married to  Trena for 32 years and has two grown children and one grandson. Find Scott Meehan in @
AMAZON
almscott.weebly.com
Facebook 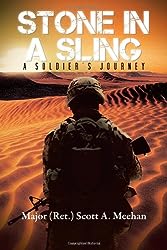 AMAZON
STONE IN A SLING: A SOLDIER'S JOURNEY is the extraordinary story of a young man who enlisted in the U.S. Army in 1980 and retired as a Major in 2005. He shares his experiences as the son of a missionary jungle pilot who survived a Marxist terrorist plot in Bogota, Colombia and then four years later joins the US Army Special Forces. Then, he falls in love with an American teacher from Roanoke, Virginia while in the Amazon jungles of Ecuador and begins a family.

An unlikely set of experiences and people accompany him along the way - from living among the indigenous people in Latin America, to behind the wall in East Berlin, tangled in a game beyond his control with a Soviet KGB officer. He takes you from the joys and struggles of fatherhood, to gathering intelligence from Iraqi prisoners during Desert Storm. He forms relationships with the Iraqi people during two tours of Operation Iraqi Freedom, relationships that would lead to the capture of Saddam Hussein.

Out of a 25-year Army career, Meehan emerges victorious over his doubts, fears, and the hatred of his enemies. Ultimately, amidst the loyalty and freedom that accompany true love, he discovers remarkable truths and rekindles his faith in God.