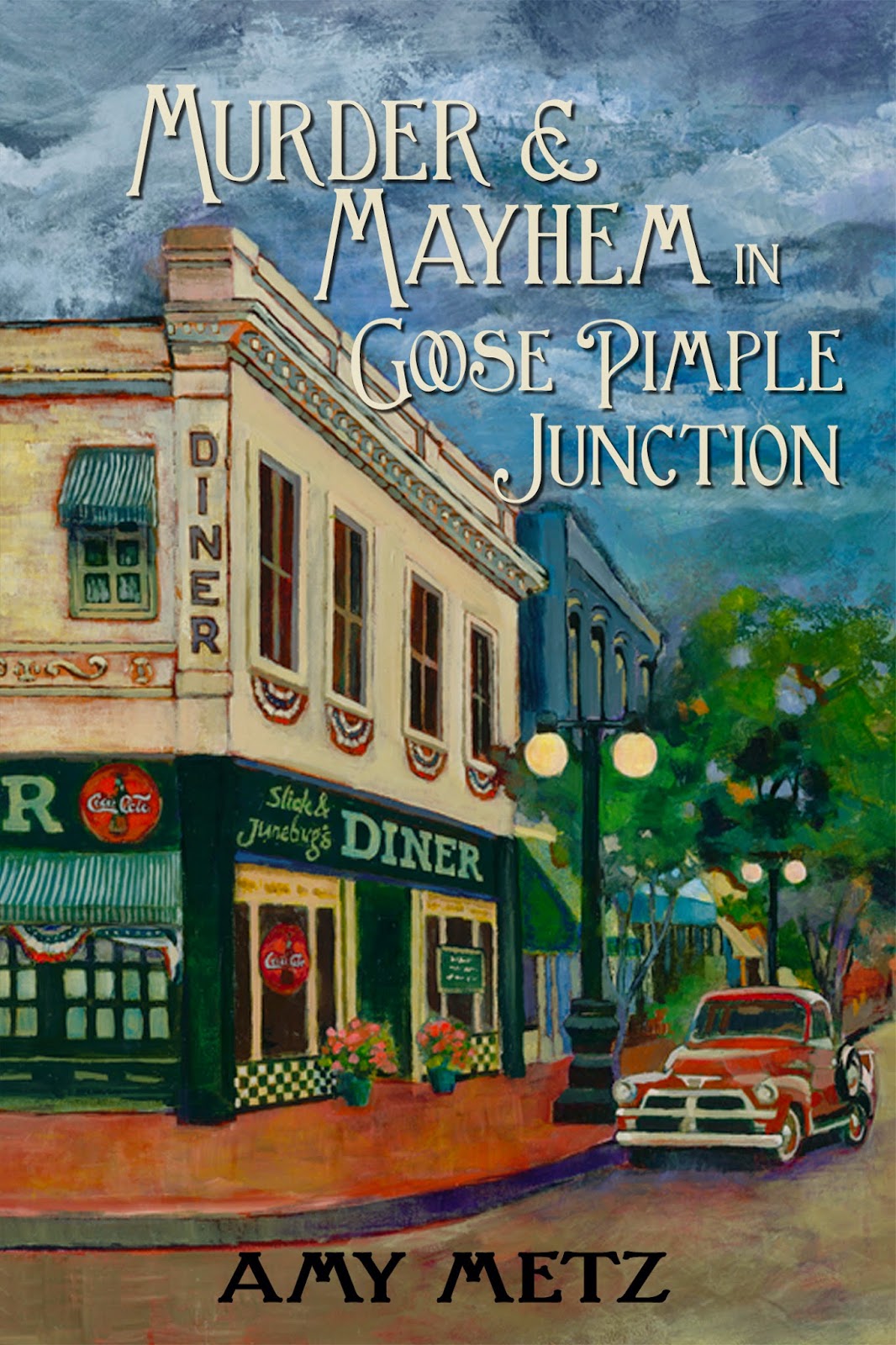 When Tess Tremaine starts a new life in the colorful town of Goose Pimple Junction, curiosity leads her to look into a seventy-five-year-old murder. Suddenly she’s learning the foreign language of southern speak, resisting her attraction to local celebrity Jackson Wright, and dealing with more mayhem than she can handle.

A bank robbery, murder, and family tragedy from the 1930s are pieces of the mystery that Tess attempts to solve. As she gets close to the truth, she encounters danger, mystery, a lot of southern charm, and a new temptation for which she’s not sure she’s ready.


A MOMENT WITH AMY METZ, by DAN O'BRIEN

Dan O'Brien, editor of Empirical and author of The End of the World Playlist, Bitten, Cerulean Dreams, and The Journey asked me some really fun questions in an interview for his website, The Dan O'Brien Project, and he's kindly agreed to let me post it here.

Tell us about your most recent release.
Murder & Mayhem In Goose Pimple Junction was inspired by events in my family’s history. I remember hearing accounts when I was a little girl of the murders and thinking they were heartbreaking and intriguing. One of the murders is unsolved to this day, except for in my novel, where main character Tess Tremaine comes up against the killer’s relative who is intent on keeping the murder a cold case. But Tess is a little too stubborn to let a little mayhem get in the way of her solving the mystery and bringing a murderer to justice.

What’s the most blatant lie you’ve ever told?
Four years ago I had to tell my mother that she was going to an assisted living facility for just a few weeks for rehab, when in fact her dementia had earned her a one-way ticket.

What is the most demeaning thing said about you as a writer?
Someone said my book was offensive and sadly idiotic. But I have a lot of 5 and 4-star reviews that counteract that comment.

How do you react to a bad review of one of your books?
I try to keep it in perspective, remembering that everyone is entitled to a different opinion. What really bothers me are the people who don’t say anything. When someone tells me they can’t wait to read my book but they never comment on it. Or they say, “I read your book,” followed by silence. I can deal with constructive criticism — I may not agree with it, but at least I know what they didn’t like — it’s silence that I find hard to deal with. It’s difficult, because we’re talking about people I know, and I thought they’d be more supportive, but also their silence doesn’t help me become a better writer or write a better book.

When are you going to write your autobiography?
Actually, I’ve already written it. It’s not an actual autobiography, because I wouldn’t make anyone read that drivel, but it’s a memoir about my mother, her dementia, and our contentious relationship. I’m currently collecting rejection letters from agents and publishers for it. If you know an agent or publisher, tell them about it — it’s fabulous!

Are the names of the characters in your novels important?
Yes, names are important. My book is set in the South, where oftentimes names are varied, interesting, and weird. I’m particularly fond of nicknames, like Pickle and Butterbean, and double names, like Henry Clay and Martha Maye.

What about the titles of your novels?
What about them? Oh, are they important? Well, yes. Many times a title can make or break a reader’s decision to buy the book. I named my town Goose Pimple Junction and put it in the title because, to me, the name reflects the quirkiness of the town and the book. It’s a fun town, and I hope the title reflects that. But I think people either love the title or hate it.

Are there any occupational hazards to being a novelist?
Besides being a little mentally unbalanced? Yes, I’ve found extra poundage to be an occupational hazard. Sitting all day at a computer doesn’t burn many calories, and weight gain is inevitable. I’m trying to be more disciplined and get my big behind up for exercise periodically each day, but sometimes it’s hard to stop when I’m on a writing roll.

What’s your favorite fruit?
Lemons. Does that count? A runner up would be peaches. Although it really depends on the season. In the summertime I love strawberries, honeydew, and peaches, in the fall I love crisp apples, early winter is those little Clementine oranges. And then there are pineapple and bananas, which are both good pretty much year-round. And lemons. I love lemon anything. Is that TMI?

How many people have you done away with over the course of your career?
Well let’s see … I think the total is only five. Maybe I should bump that up a bit for GPJ2 and 3.

Ever dispatched someone and then regretted it?
Yes. I can’t say who, because I don’t want to ruin it for someone who may not have read the book yet, but there’s one character in Murder & Mayhem who is maybe my all time favorite. It killed me to kill him off (sorry, that was lame — but true). I’m still in mourning. Maybe I can make him have an evil twin. Double trouble!

Have you ever been in trouble with the police?
Hahahahahahahaha. That’s funny. At least, people who know me will get a kick out of it. I did have to go to the county jail four years ago, but that was to deliver some evidence. That’s a whole nother story. The answer to your question is a big no.

So when were you last involved in a real-life punch-up?
Way back when I was a little girl, fighting with my sister. That’s as bad ass as I get.

If you were going to commit the perfect murder, how would you go about it?
I think it would involve poison. And that’s all I’m saying on that one.

What do you want to be when you grow up?
Betty White.

What is your favorite bedtime drink?
Sweet tea or juice.

Do you ever wish that you had an entirely uncreative job, like data entry or working in a factory?
Absolutely not. Are you nuts?

Do you believe in a deity?
Yes. I am a Christian, and I believe in God.

Who would play you in a film of your life?
Maybe Oprah. Yes, I know I’m Caucasian, but who wouldn’t want Oprah to play them?

What are the most important attributes to remaining sane as a writer?
I think a sane writer is an oxymoron.

Have you ever read or seen yourself as a character in a book or a movie?
Maybe Eeyore. Or the Catwoman, played by Halle Berry. Oh wait, that was in my dreams.

What is the single most powerful challenge when it comes to writing a novel?
For me, it’s coming up with a good plot. It seems like all the good ones have already been taken. I had a plot all planned out for GPJ3, and I hadn’t told a soul about it. One day, my son started telling me about a book he read — and it was my plot! Or mine was theirs. I swear I’d never heard of it. I changed my plotline pdq.

What do you consider your biggest failure?
Dropping out of college my sophomore year. I transferred to another college the following fall, but leaving school remains a big part of my checkered past.

Do you research your novels?
In Murder & Mayhem I researched the real murders that were the impetus for the plot. I read everything I could find so that I could get the facts right for that portion of the book.

How much impact does your childhood have on your writing?
Well, considering I wouldn’t be who I am if I hadn’t had a childhood, I’d say a lot. Is that too cheeky?

What was the greatest thing you learned at school?
When God sends us on hard paths, He provides strong shoes. That, and you should dress for every occasion. There’s no sense in looking like a wash-woman.

Do you laugh at your own jokes?
Sure, somebody has to. (LOL.)

Do you admire your own work?
Yes and no. I love the characters and the town I created, but I have a hard time reading the book. It’s kind of like actors who say they can’t watch themselves on screen. I find myself wanting to rewrite or edit it every time I pick the book up.

What are books for?
Different things for different people. For me, they’re for escape. Pure pleasure.

Are you fun to go on vacation with?
That would be a better question for my family. I think that my youngest son would say I spend too much time behind my camera.

How do you feel about being interviewed?
It’s somewhere in between getting a root canal and a day at the beach.

What’s the loveliest thing you have ever seen?
A full moon reflecting on the ocean.

Amy Metz is the author of Goose Pimple Junction mystery series. She is a former first grade teacher and the mother of two grown sons. When not actively engaged in writing, enjoying her family, or surfing Facebook or Pinterest, Amy can usually be found with a mixing spoon, camera, or book in one hand and a glass of sweet tea in the other. Amy lives in Louisville, Kentucky and would love to hear from you.