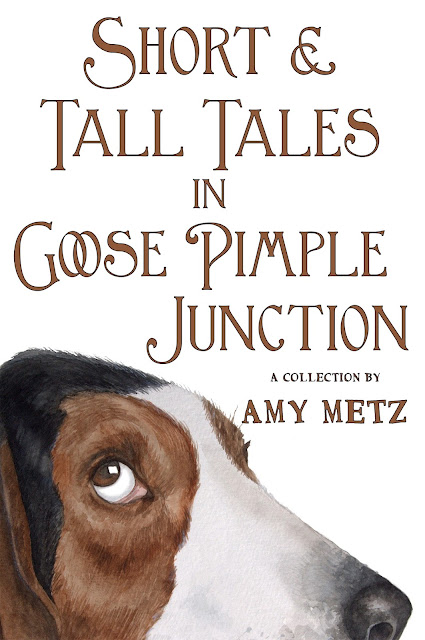 
This is not your average Southern town. With a hint of mystery and a lot of laughs, you'll catch a glimpse of everyday life in Goose Pimple Junction in this short story compilation. Short & Tall Tales occurs chronologically between Murder & Mayhem, book 1, and Heroes & Hooligans, book 2, in the Goose Pimple Junction mystery series. Tales is a fun escape that will answer readers' burning questions about the residents of this quirky, small town.

How did Johnny Butterfield become police chief?
How did Tess and Jack get engaged?
How did Ima Jean come to live with Louetta?
How do you celebrate an Apple Day?


He may be good-looking, but good-looking won't put food on the table.  ~Willa Jean Coomer


Downtown Goose Pimple Junction was bustling the next morning when Johnny parked his car and walked a block to the diner. The yellow tickets that were stuck under windshield wipers on some of the cars vaguely registered with him because Ima Jean’s abduction was on his mind, and he didn’t have room to think of much else. Periodically, he thought about Martha Maye and how pretty she looked when she’d brought him fried chicken, home fries, macaroni salad, and a slice of apple pie. But he forced his mind back to Ima Jean and how he was going to go about finding her.

The diner was crowded but went deadly silent when he walked in. Everyone stopped talking, and all heads turned his way. He met a few people’s eyes, nodded a hello, mumbled “Morning,” and sat down at the counter next to a man who looked older than Moses.

“You’re mighty brave to bring yourself in here today, Chief. I myself don’t hold no ill will, but then again, I ain’t got a car, so it’s no skin off my nose.”

“What can I getcha, Chief?” She put an emphasis on “Chief” but the word was dripping with disdain.

Johnny wondered if it was his imagination or was she glaring slightly at him? He put a hand to the back of his neck as he craned his head around, finding several other people giving him the same expression. Curious.

“Coffee, a fried egg, and cheese grits, please.” He flashed her his best grin, but she didn’t seem to notice.

She turned on her heel without another word, calling to Slick, “A deadeye and mystery in the alley, Slick.”

Johnny noticed the old man cackling to himself and wondered what was so funny. He seemed to be a regular. Surely he was used to diner lingo. Moses turned to the man next to him and mumbled something that sounded like, “I haven't had this much fun since the pigs ate my brother.”

Willa Jean came back with a cup and saucer and a pot of coffee. As she poured the brown liquid into the cup, a good amount spilled into the saucer. She looked up at Johnny and deadpanned, “Oops,” but she walked away, making no attempt to clean it up.

Conversation had started again in the diner, but it was in hushed tones, not the loud chatter that Johnny had heard when he first came in. Once again, he looked around the restaurant and noticed furtive glances coming at him. A few words and bits of sentences wafted his way: “a lot of gall, arrogant, outsider, amateur, dumb as a fencepost . . . ” He considered asking the gentleman next to him if this was normal townsfolk behavior, but Willa Jean came back and set a plate in front of him. His gaze went from the plate to her eyes, which seemed to hold a challenge.

Willa put all her weight on her right leg and propped her hand on her hip. “Least your eyes work.”

“Well, see . . . I could be mistaken, but I thought I ordered fried eggs and grits.”

“You’re mistaken.” She flung a towel over her shoulder and walked away.

Johnny looked at Moses and said, “I’m late to the party. Wanna tell me what’s going on?”

“Oooh, law,” the man drawled. “That was almost as ugly as Uncle Moody’s divorce.” He swiveled off his stool, saying, “’Scuse me. I have to see a man about a horse,” and he made his way to the restrooms.

Amy is a former first grade teacher and the mother of two sons. When not actively engaged in writing, enjoying her family, or surfing Facebook or Pinterest, Amy can usually be found with a mixing spoon, camera, or book in one hand and a glass of sweet tea in the other. Amy lives in Louisville, Kentucky.