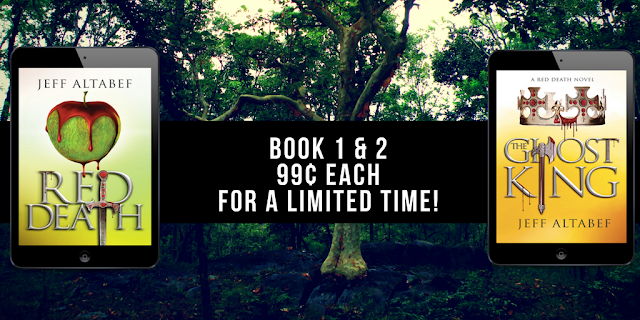 Who are Aalis, Wilkey & why are they going to war? Will there be more magic & mayhem in this second book? One of the best parts of this release is you can get both books for only 99c right now!


What else is so great about this release? This exclusive excerpt! There are 5 featured excerpts on this tour. One on the Novel Publicity page, one on Jeff Altabef's Website, and 3 spread among the 20+ blogs that have helped Jeff with this release!

Enter for a chance to win $50, signed paperbacks, or crown necklace!


Special note for reviewers! If you reviewed the Ghost King or Red Death, email your review links to Naomi@novelpublicity.com & you’ll get entered for a $50 reviewer only prize! 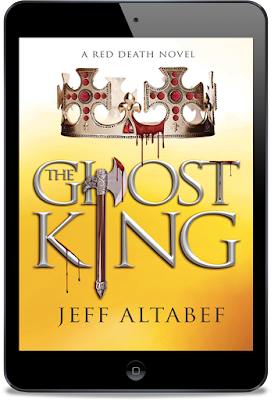 An Ancient Prophecy foretold.
An Evil haunts the land.


A battle looms against overwhelming odds.


Led by a powerful witch, a wild invading army threatens to tear the Soulless lands apart. To survive, the three tribes must join together, but old grievances and hatred divide them. Only Wilky can unite them, but when he glimpses the future, he sees only a glimmer of hope; too much of the future remains veiled in darkness.


As the battle approaches, King Dermot orders his brother, Eamon, to stay behind at the Stronghold and defend against a possible siege. Eamon, who took an oath to fight the invaders, defies his brother, risks everything, and plunges into a desperate race with Aaliss and Wilky to unite the tribes.


Enemies from all sides conspire against them. Only together can they hope to succeed against the witch who will stop at nothing to destroy them. Yet even united, they will need magic to defeat this enemy at their door.


As the battle looms, only one chance at survival remains--the Ghost King--but who is he, and what will be the price of their redemption? 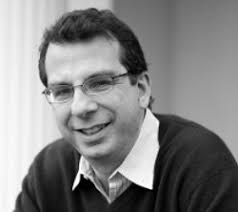 Jeff Altabef is an award-winning author who lives in New York with his wife, two daughters, and Charlie the dog. He spends time volunteering at the writing center in the local community college. After years of being accused of "telling stories," he thought he would make it official. He writes in both the thriller and young adult genres. Fourteenth Colony, a political thriller, was his debut novel. Evolved Publishing has published Jeff’s second thriller, Shatter Point, which won the Pinnacle Book Achievement Award for Fall 2014 in the category of Best Thriller.Jeff's first young adult novel, Wind Catcher: A Chosen Novel will be published in March by Evolved Publishing. He's extremely excited that his daughter, Erynn Altabef, is his co-author on the Chosen Series. As an avid Knicks fan, Jeff is prone to long periods of melancholy during hoops season. Jeff has a column on The Examiner focused on writing and a blog designed to encourage writing by those that like telling stories.