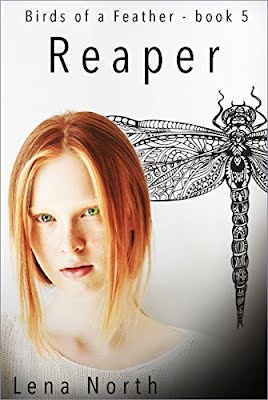 She takes a job as stable hand at Double H, but she's really there to let her unusual abilities help the group around Hawker Johns in their search for the man responsible for death and destruction - Cameron Strachlan.

Abuse victim. Murderer. Lost boy. The devil. Annie has more reason than most to hate the man, but that is a secret too.

It's a surprise to find Olly at Double H, and nothing about him is like she'd imagined. Olly is hard and angry, and his eyes almost as black as the tattoos on his neck. She knows immediately that she's looking straight into the eyes of the Reaper.

As they spend time together, the Olly she thought he would be slowly begins to show again, but there are still doubts at the back of her mind... What will happen when he finds out? Can he handle her secrets?

Reaper is the fifth and final book in the Birds of a Feather series, a young adult/coming of age series with paranormal elements, full of laughter, mystery, and romance.

Other Books in the Birds of a Feather Series:

Wilder’s wonderful grandfather is dead, and so is her mother, but Grandpa Willy gives her one final gift in his will – the knowledge that her father is only her step-father.

Once she meets Hawker, the scary man who turns out to be her real dad, her life takes an unexpected turn. She finds out about a heritage she never knew she had, and secrets from the past are uncovered as she fights to save her part of the world from destruction.

And then there’s Mac, with his green eyes and a soft voice that flows through her like sweet honey. He’s there to help Wilder when she needs it the most, and as she struggles with how to fit into the group of people around her dad – having Mac in her life becomes more important with every bad thing that happens.

“Wilder” is the first in the Birds of a Feather series and a spin-off from the Dreughan trilogy. It’s set in modern time and can be read stand-alone.

Jiminella “Jinx” Sweetwater is a genius. She’s a scholar, an inventor, hardworking and loyal, and well known in the scientific circles around the University in Prosper City.

Being smarter than everyone else might seem like a good thing, but it isn’t. At least, it isn’t to Jinx who has two friends, a small condo, and no life.

After a fight with her best friend Wilder, it just gets worse. Someone breaks into her home and when her parents show up in all their hippie-like glory, Jinx has had enough and escapes to a small village by the sea.

Suddenly, Jinx finds herself involved in village life, living with the unpleasant Mrs. Fratinelli and trying her best to juggle all the things that seem to end up on her plate. And then there’s calm, cool and gorgeous Dante – Snow’s boyfriend, who seems to see right through the shields Jinx has put up around herself, straight into her mind.

She had it rough growing up, and when it finally looks like she’s getting her life firmly back on track, breaking up with her boyfriend starts a string of events that threatens to bring Mary to her knees.

Fortunately, there are good people in her life who will do everything in their powers to help her when she needs it. Mary’s girlfriends, Jinx and Wilder are there for her, and after she’s rescued from being kidnapped, Carson and Bo take her into their home, becoming the family she always wanted but never seemed to get to keep.

As the group around Hawker Johns hunt the men who wanted to trade Mary for the valuable crystal from the mountains, she slowly recovers. Then life throws her another few curveballs, and it looks like she’ll lose everything yet again.

Mary is resilient and used to restarting her life from nothing, but when it looks like she’ll also lose the man she loves, maybe the happy girl has just had enough?

Picture this is the third book in the Birds of a Feather series, a young adult/coming of age series with paranormal elements, full of laughter, mystery, and romance.

Snow’s best friend is a bird. An osprey, to be specific.

Everyone knows Snow’s parents died a long time ago, and she has perfected her happy smile and girly giggle so no one suspects that she hides a darker side of herself deep inside. No one, except her bird – and Nick, who always seems to know how she feels.

Then Hawker Johns blackmails her into joining his covert group of protectors. The imposing sheriff from Norton sends Snow to the Islands to investigate Jamie Jamieson, one of her friends and a man she dates casually, and once the first fury has passed, she’s eager to go. Mostly so that she can come back and shove Hawker’s suspicions down his throat.

Things are not what they seem on the Islands, though, and when Snow has been shot at, almost drowned and fallen through the roof of a cave, she starts thinking about her life, and her past.

Then she suddenly finds herself in a situation where she has a tough choice to make. Will she follow her heart or the pull from her family and friends? And will she ever find peace with her past?

Black Snow is the fourth book in the Birds of a Feather series, a young adult/coming of age series with paranormal elements, full of laughter, mystery, and romance.

“Thanks for bringing lunch,” I whispered.

“Ma used to do stuff like this, all the time,” he replied.

I forced myself to keep breathing evenly and turned slowly.

“Yeah?” I said, hoping he would continue talking about her.

The others from Norton and the rest of his extended family were constantly chasing him to talk about what had happened, and I thought they were so incredibly stupid. The more they pushed, the deeper he dug in and refused, and I didn’t understand why they couldn’t see that. Snow and Jinx’ visit had been the last straw, and the huge fight they’d had in front of everyone ended in an impasse where they didn’t talk to each other at all. Now he’d brought his ma up himself, though.

Our gazes held, and slowly he relaxed.

“It hurts to talk about her,” he confessed.

“I miss her,” he murmured and closed his eyes.

When he opened his eyes again they were so full of pain that my own suddenly burned with tears, but he’d started talking and I pushed gently, hoping he’d be ready for it.

“I don’t know what you’re feeling. My parents are alive, Olly, so I can’t know what it’s like and I dread the day when I have to feel what you feel right now,” I said. Then I sighed, and went on, “But I lost my best friend a few years ago and I know what it felt like, so I know what grief is. And it’s not the same but –”

I cut myself off, remembering the feeling of helplessness and how afraid I’d been. My friend had been shot, and I’d feared I would be too. I’d been hiding since.

“What was her name?” I asked again.

He didn't say anything at all and kept looking at me with wide, pain-filled eyes.

“They say a person dies three times,” I whispered. “The time of her death, when you put her to ground, and when people stop saying her name. You can’t change the first parts but you have the power to keep a bit of her alive, Olly.”

“Byrd Anna Maria Harper,” he said quietly and closed his eyes. “Most people called her Bee. My father called her Bebe when he thought no one heard, but to me, she was just Ma.”

His brows went up but his face softened, and I slid my hand gently over his cheek.

He chuckled and shifted until he was on his side. Then he told me about his mother, and how she'd had this theory that if you laughed at least once every day you would get fewer wrinkles and live longer. His father was a school teacher and had argued that there wasn't any scientific evidence to support her theory, but she'd insisted, and made sure he and his taciturn father laughed every day. Sometimes it had been silly jokes or practical ones, and sometimes she'd made them dance in the kitchen after dinner, doing the funky chicken until they howled with laughter. I'd known things about her in the same way I did about all of them, but I realized I hadn’t known her at all, just as I hadn’t known all of Olly, not for real, until I came to Double H.

We laughed as he told me about that part of her, and when he was done, he leaned over me.

“Thank you,” he whispered.

“You’re totally welcome,” I replied and he smiled like I knew he would.

His hand suddenly trailed up my side, in under both my jacket and long-sleeved tee, and the way his fingertips slid slowly over my ribs made me shiver a little.

“Exactly,” he murmured against my neck as he moved his mouth up until he breathed softly into my ear. “You’re gonna be naked in a minute, Annie. Okay?”

The proper way to put it here would probably be to describe how I love to play with our two big dogs, adore my fantastic daughters and how much I love to read.

Another way would be to use my imagination and then I would be a super powerful warrior woman, think Xena the warrior princess (though with less tacky clothes). Or when I think of it, maybe I'm actually more of a Hercule Poirot (sans the suit and moustache). Or maybe I'm like Aragorn, strong and cool and then I might get to meet Gandalf! Or I could be Bella's pretty cousin and snap Jacob up in a second (yeah, I'm so not team Edward), or wait, maybe I could be like one of them  heroines in historical novels who swoon all the time. I've always wanted to swoon...

Well, I guess you get how my mind is working (or not working, some say).

Anyways, I like to write. Stories, adventures, romantic and happy stuff mixed up with sorrow and hardship, and bit of laughter here and there because the way I see it - life is way too short to go around feeling grumpy.