The Sound of Suffering (The Master of Perceptions #2) by Darin C. Brown

**Though The Sound of Suffering is a sequel, it can be read as a standalone as the first chapter summarizes book one.** 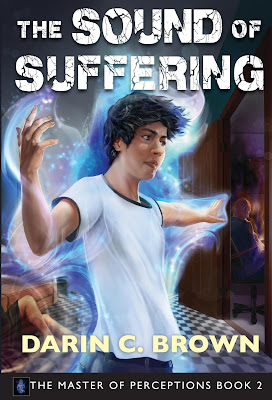 Hunter Miller has a secret.
He can read and manipulate the auras that surround everyone.
Having used his talent to dethrone the reigning school bully, thirteen-year old Hunter finds himself thrust into a new quest after hearing screams in the aura of a teacher.  Unable to resist this powerful siren song, he investigates—despite warnings from his family and friends. It nearly costs him everything.
Upon discovering the truth, Hunter seeks assistance in his mission to defeat his formidable adversary. As the situation escalates, the adolescent hero ultimately realizes that despite the risks, he must fight this battle alone.
In this second installment of The Master of Perceptions series, can Hunter use his extraordinary powers to rescue an innocent woman without losing himself in the process?

5.0 out of 5 stars Master of Perception Series ramps up!
February 5, 2019
Like Rowling's Harry Potter, young Hunter is gaining maturity and skill in each new book of the "Master of Perceptions" series. The reader shares his increasing grasp of the unique ability to see people's auras and manipulate them, and in Book 2 Hunter has a mission. He must deal with the very adult issue of domestic abuse. The perpetrator is a policeman, and his victim is a teacher at Hunter's school. He can hear her aura screaming for help, but what can a sixth grader do against an officer of the law? Dr. Darin Brown expertly builds the tension and leads us to understand this autistic young man's unique perspective. Imagine the power of seeing people's feelings and thoughts in their auras and also being able to manipulate the colors to affect their behavior. Hunter can already heal himself, but this skill comes at a price. It drains his energy, which can send him into the Void, if he is doesn't keep up his carbs and sugar. Believable - though fantastic - and engaging, I highly recommend the "Master of Perception" Series. 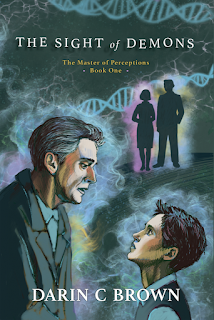 The Sight of Demons (The Master of Perception #1)Release Date: October 16th 2017
Summary:
Hunter Miller sees demons. The terrifying shadows engulf him and everyone he knows—yet nobody else notices their presence.


Hunter can’t escape them, so he sets out to understand them. Why do they follow him? What are they trying to tell him?


In this first installment of the Master of Perceptions series, pre-teen Hunter discovers that every sensation the demons produce—whether it be sight, sound, texture, flavor, or smell—has a different meaning. And that by breaking this code, he just might be able to harness their power.

About the Author
DARIN C. BROWN spent the last twenty years saving lives as an emergency medicine physician in New Hampshire and Maine. His master’s degree in biomedical engineering and PhD in biophysics helped him conceptualize Hunter’s astounding capabilities. When he’s not writing, he directs Murder Mystery Dinner Theater, including the biannual shows on the Conway Scenic Railroad. In addition to his varied academic interests, he competes at the national level in master’s track. He currently resides in the White Mountains of New Hampshire with his wife, Dr. Sandra Brown, and their many pets.

Auras and other Metaphysical choices in writing
by Darin C. Brown
I have friends who see auras, although I do not myself. I spent many hours researching the occult, listening to hypnotists, mediums, Reiki masters, and many others in preparation for my novels. The reason why this all works well with The Master of Perceptions is the basic premise that Hunter perceives things differently that everyone else.
There are only really three “senses” from a strict perspective. Electromagnetic, tactile (which includes vibration, the actual definition of temperature) and chemical.  All perceptions are the brain’s interpretation of these sensed inputs. We all say “five senses” because Aristotle did many years ago. He was just plain wrong.
An individual’s perceptions are much more numerous. Sight (light is part of the electromagnetic spectrum), sound (vibration of the tympanic membrane in the ear transduced), smell (chemical), taste (combines chemical and tactile) and feel (tactile) are simply the most common, thanks to a dead Greek thinker.
Consider others like proprioception (the location of your body in space), direction, equilibrium (balance), attraction, acceleration, moisture, agency (sense of having made a decision) familiarity (recognition) anticipation, or social awareness. These are all truly unique to the brain of the person doing to perceiving, and therefore cannot truly be understood by anyone else. After all, there is no actual “light” or “sound” in your brain, only your individual perception of these stimuli. Who knows for sure if what actually exists in the world matches what each of us perceives? My son is color blind and can’t tell red from green. My mother cannot smell much of anything (which is why she was such a terrible cook). There are hundreds of similar examples.
If all perceptions are unique, what about auras? Maybe they give the perceiver unique perspective that others simply do not have. Might there also be ability to speak with the dead, or manipulate conscious thoughts, or anything else you might be able to imagine? Why not?
Hunter, as The Master of Perceptions, will gain control over many of these areas. His unique ability will hopefully give readers insights into their own potential.