The Romantic Life of a Cozy Mystery Protagonist

I am generally known as a cozy and historical mystery author. One of the “rules” of cozies is that you can read about the protagonist’s romantic life, but they close the bedroom door before anything gets too explicit.

Robbie Jordan, the main character in my Country Store Mysteries, had an early failed marriage and then a budding romance that didn’t work out. Both times she was dropped by the guy, so she’s understandably a little skittish when Abe O’Neill starts giving her a lot of attention. It helps that he’s known as a good guy around town. He grew up in South Lick, Indiana, and everybody knows the congenial electric company lineman. It’s possible that his good looks and big smile played a part in winning her heart, too.

By Strangled Eggs and Ham, the sixth book in the series, Robbie and Abe are spending regular time together, and nights, too. Here’s a snippet of a scene from Biscuits and Slashed Browns, an earlier book, at the end of a dinner Abe prepared and brought to Robbie’s place.

Abe took me by the hand and led me to the couch in my small living room, switching on a lamp as we went. “I did bring dessert.” He flashed me a wicked grin. “Besides myself, that is.”
“How did I get so lucky?” I smiled as I shook my head. Birdy strolled into the room, too. He coiled himself and leapt up onto the back of the couch in one smooth move.
“How about vanilla bean ice cream with a homemade gingersnap?” The dimple punctuated his own smile. “And how does a tiny chaser of Abe’s finest cognac sound?”
“Are you kidding? What does heaven sound like?”
He grinned again and made off for the kitchen. Birdy hopped down to nestle between the corner of the couch and my hip. I watched Abe’s cute tight butt leave the room, amazed at the fact that, in four months together, we’d never argued. Conflict just didn’t seem to come up between us. Maybe I was in denial, but I planned to enjoy this ride as long as I could. Possibly for the rest of my life.

I love writing mysteries, and the romance in my books always takes a back seat to the main story. But most people have – or have had – intimate relationships in their lives, and I see no reason to gloss over that. You’re just not going to read the details of exactly how they’re intimate, which is fine with me. I don’t want to write that part, either!
Maddie Day writes the Country Store Mysteries and the Cozy Capers Book Group Mysteries. As Edith Maxwell, she writes the Quaker Midwife Mysteries, the Local Foods Mysteries, and award-winning short crime fiction. With eighteen novels in print and five more in production, Maxwell has been nominated for an Agatha Award six times. She lives north of Boston with her beau and two elderly cats, and gardens and cooks when she isn’t killing people on the page or wasting time on Facebook.

Please find her at edithmaxwell.com, at the Wicked Authors blog, and elsewhere:

Killer Characters (on the third of every month)
Amazon
BookBub
Goodreads 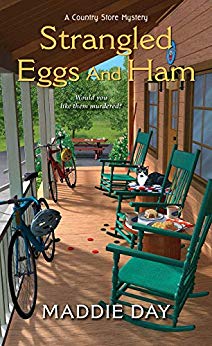 Robbie Jordan’s rustic country store is growing in popularity. But when a dead body appears, it turns out that Robbie’s home-style cooking attracts hungry customers—and murder!
While Robbie scrambles through breakfast orders for her expanding clientele at Pans ‘N Pancakes, tempers run as high as the sticky August heat in South Lick, Indiana. Real-estate developer Fiona Closs plans to build a towering luxury resort at one of the most scenic hilltops in Brown County, and not everyone can see the sunny side of the imposing proposition—including Robbie’s furious Aunt Adele, who doesn’t waste a minute concocting protests and road blockades. When tensions boil over and a vocal protester is silenced forever at the resort site, Robbie ditches the griddle to catch the killer. But if slashed tires are any indication, she’ll need to crack this case before her own aunt gets served something deadly next . . .
Includes Recipes for You to Try! 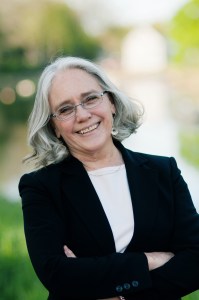 Maddie Day is a talented amateur chef and holds a Ph.D. in linguistics from Indiana University. An Agatha Award-nominated author, she is a member of Sisters in Crime and Mystery Writers of America and also writes award-winning short crime fiction. She lives with her beau and three cats in Massachusetts.

She blogs every weekday with the other Wicked Cozy Authors at wickedcozyauthors.com