In the small town of Golden Trail, PA, the Fallen Eagles MC isn't just any group of veterans. They're patrons of the community, the protectors of veterans and townsfolk alike, and a motley group of world military-trained men and women. And their small town isn't afraid to call on the varied skills of this rough and ready crew to help out on a case or two.


Summer brought us blackmail.
Winter will bring us murder.

With a Philly-based serial murderer on the loose, and the most recent victim a member of their small town, the Fallen Eagles MC will deal with one of the hardest cases they've ever encountered.

Davis “Eagle” Landon has given a lot for his country—an eye, a leg, time with his kids. He’s retired now and as the owner of several small businesses and the founder and President of the Fallen Eagles MC, this former Texan has his roots firmly planted. He’s ready to settle down again, and only one woman will do.

Winter is different. A bit of a loner. Quiet. Sarcastic. She’s also the owner of the one and only full-service salon in Golden Trail and has an amazingly supportive family and a close-knit group of friends who love her for the odd woman she’s molded herself into. She still feels like there’s something missing, though. As the youngest Markham, she’s seen the many struggles her older sisters have endured, and as much as the prospect scares her, she wants a love that is all her own. The problem? Nosy sisters, a murderer killing women who fit her description, and the guy she loves is a good twelve years older and way out of her league.

Eagle and Winter have a tough road ahead, but what these two are about to realize is that not even death can separate two souls who are f**cking written in the stars.

Trigger Warning: This book contains scenes of violence/sexual violence/gore that may be difficult for some readers.

What are your top 10 favorite books/authors? (not in any particular order)
I have so many favorites but when I think back to those I’ve read time and again, the ones I never get tired of, these are it. The thing about great literature is that a book may not be for everyone, but it offers new lessons to the person it touches. Each time, that reader gains something new. They grow. They experience. They become a better version of themselves.

1. Soaring by Kristen Ashley
2. A Tale of Two Cities by Charles Dickens

4. The Count of Monte Cristo by Alexandre Dumas

7. Dance Upon the Air by Nora Roberts

8. Order of the Phoenix by J.K. Rowling

10. The Accidental Vampire by Lynsay Sands

My name is T. I started writing when in my single digits, and while this turned to poetry and songwriting in high school, in college I went back to my roots, and even added some bits. Since then, I’ve melded my love of poetry, of music, of fantasy and romance, of storytelling and relationships, of life and love and the pursuit of both, and I’ve created newer tales. I feel that my Fallen Eagles Series is the culmination of my journey so far, and although it’s only a couple books in, I’m excited to share these stories with you.

In the small town of Golden Trail, PA, the Fallen Eagles MC isn't just any group of veterans. They're patrons of the community, the protectors of veterans and townsfolk alike, and a motley group of world military-trained men and women. And their small town isn't afraid to call on the varied skills of this rough and ready crew to help out on a case or two.


Ten years ago, Kit Markham left her high school sweetheart, Lee Devereaux, behind to serve her country. The woman who returns is just a shadow of her former self. She might be the kickass Second of the Fallen Eagles MC, but she's also damaged—and it's an unbearable struggle at times, just to make it through the day. The only things that help are her veteran MC, the Fallen Eagles, her family, and long, quiet rides on the back of Lee's bike.

Lee has his own share of war wounds, but none worse than the burden he’s taken on to see that the Kit he once knew finds herself again.

It’s been over two years since she returned home, and Lee still can’t find the girl he once loved in the woman who’s become so lost. He’s had it with being kept in the dark. He’s demanding answers—but he’s not the only one who’s interested in Kit’s past.

When local soldiers, veterans, and their families start getting threats from a team of blackmailers, Kit’s shocking history is revealed. A twist that has Lee reeling and wondering if what they once had is even salvageable.

Trigger Warning: This book contains situations of sexual abuse/assault/war violence that may be difficult for some readers.

T. Birmingham believes words are our greatest form of magic. And making magic is what she loves best. But when it's time to put the words aside, T. enjoys drinking whiskey with her tribe, eating pretzels with Nutella, watching and reading as many stories as she can, especially romances, and traveling wherever the wind takes her-sometimes all at once. She also loves a sturdy (but cute) pair of cowgirl boots, is hoping to one day build a log cabin with her Man Bear, and she writes mystery and suspense in the Paranormal, Contemporary, and MC Romance genres. 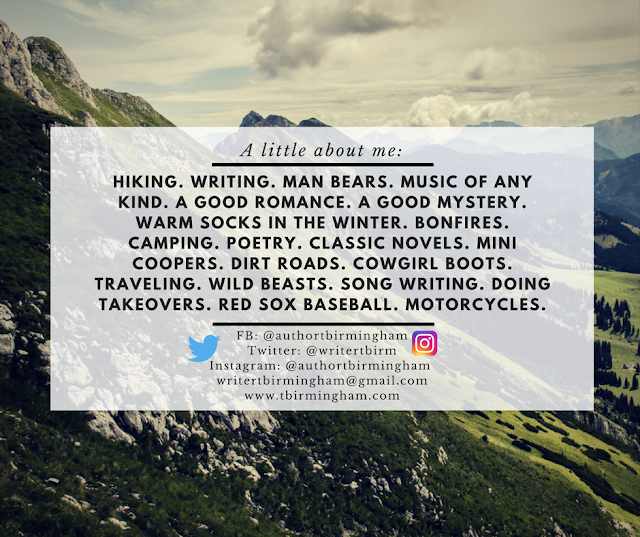