The True Story Behind My First Non-Fiction Book

Those who have read any of my books know I prefer writing mystery novels. I have a cozy mystery series, the Cobble Cove Mysteries, about a librarian and a library cat in the small, fictional upstate town of Cobble Cove, New York. I’ve also written a psychological thriller, Sea Scope, a crime thriller, Reason to Die, and a medical mystery, Memory Makers. These books and the others I’ve written often feature cats in either a major or minor role. But I didn’t start out writing novels. My first publications, in the late 1990’s when I joined the Cat Writers’ Association, were articles for pet magazines. I still write articles. In fact, the Jan/Feb 2000 issue of Catster features my 4-page article about decluttering cat toys and supplies.

I took a break from article writing in 2003 when I published a short story for the Cat Crimes Through Time mystery anthology. That, too, featured a cat character. My first novel, Cloudy Rainbow, was published in 2007 after the death of my beloved Floppy and featured a cat by his name. This book has since been republished and is available along with my other books as Kindle Unlimited eBooks on Amazon and in paperback from Amazon and other online booksellers.

While I consider my new book, Pet Posts: The Cat Chats, a non-fiction work, it has some elements of fantasy to it. After all, it’s narrated by four of my cats, two of whom have since gone to Rainbow Bridge. The idea for this book came about when I found some old articles I wrote for a now-defunct website called Themestream that paid writers for stories they uploaded to the site. When those stories were read, the authors were paid for each download. The articles I wrote for Themestream were “written” by Floppy and Holly, the cats I had back in 2000. These articles included information on feline health topics such as diabetes and asthma, both conditions of which Floppy suffered from. They also featured pieces about why adopting two cats is better than adopting one, how to properly groom felines, and quizzes to determine if your cat is too fat or too spoiled. While it was twenty years since I’d read these articles, I found it interesting that I was now featuring blog posts written by my current cats, Harry and Hermione. The idea struck me that I could compile both sets of articles into a collection. I posted a request on the Cat Writers’ Association’s private Facebook group for collaboration with someone who could help me put such a book together. Ruth Thaler-Carter, my editor and publisher, responded, and we began working together on the project. The result are articles and photos that comprise my first non-fiction cat book: Pet Posts: The Cat Chats. I hope you enjoy it. 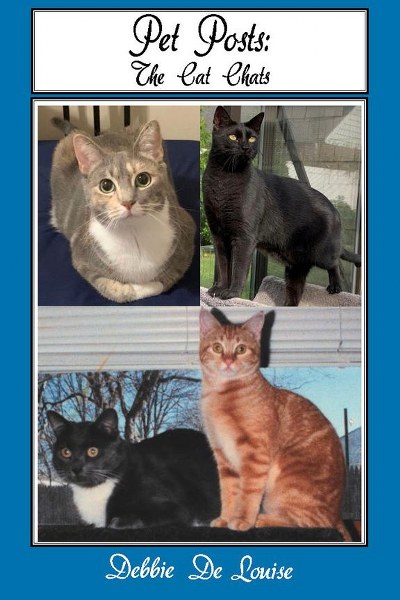 Ever wonder what cats are thinking? If your cats could write a blog, what would they talk about?
In this collection, you’ll meet Debbie De Louise’s current cats and two from the past who share their everyday activities, health concerns, behavior issues, and more.
Floppy relates his hospital experience, gives advice about taking pills, and discusses feline diabetes. His younger sister, Holly, talks about her weight issues, describes how she made the change from a feral to a house cat, and even writes a fictional story featuring her fur and human family members. Harry talks about the merits and perils of being a black cat, shares his bad habit of wire and shoelace chewing, and even gives tips about how to cope with a crisis. His sister Hermione reveals her fascination with high and low places, discusses how she mastered the cat flap door, and even reviews the Cat Writers’ Association conference.
If there’s a feline in your home or you enjoy reading about these quirky, beautiful, wise, and inspirational creatures, you’ll find these fur-st person tails from the cats’ points of view a purrfect read.
Goodreads * Buy Link 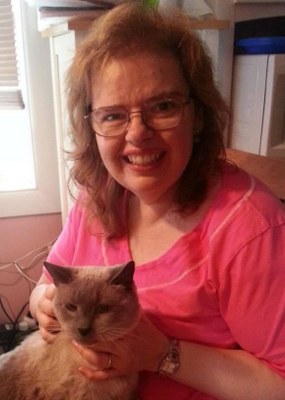 Debbie De Louise is an award-winning author and a reference librarian at a public library on Long Island. She is a member of International Thriller Writers, Sisters-in-Crime, and the Cat Writer’s Association. She has a BA in English and an MLS in Library Science from Long Island University. Her seven published novels include the 4 books of her Cobble Cove cozy mystery series: A Stone's Throw, Between a Rock and a Hard Place, Written in Stone, and Love on the Rocks, her paranormal romance, Cloudy Rainbow, her mystery thriller Reason to Die, and her latest psychological mystery, Sea Scope. She also published a romantic comedy novella featuring a jewel heist caper, When Jack Trumps Ac. Debbie has also written articles and short stories for several anthologies of various genres. She is currently querying agents to represent the first book of a new cozy mystery series. She lives on Long Island with her husband, daughter, and three cats.
Website * Facebook * Twitter * Bookbub * Amazon * Goodreads