The Half That You See Genre: Horror Anthology Edited by Rebecca Rowland

Every Story is a Ghost Story

I love scary stories, but, man, it’s the horror that really gets me. And the horror lies in the truth, usually, or the thing closest to the truth, at least.

I mean, sure, it’s scary when Michael Myers pops out from behind the bush with that look of his. But it’s horrifying to think about how bad a doctor Loomis is (just ask Ben Tramer, yeah?), and how badly every societal structure failed when dealing with such a deeply disturbed individual as ol’ Mike.

Sticking with the slasher theme for a moment, I’ve always been frightened by scenes of outright gore and body horror, so even the thought of a chainsaw in the hands of a masked maniac is enough to get my hackles up. But actually seeing, onscreen, the rusty belt ripping through tendon? I mean, yeah, I’ll keep watching, but the momentary scare of the thing will be gone just as soon as I unsee it. Just as soon as it’s off the screen, it’s out of mind.

But, like. The thought of the thing? The hint of what’s about to happen? Now that’s horrific.

Take my neighbor, for example. See, he’s got a chainsaw, too, and he’s been really pissed at me lately because I planted these trees that are “blocking his view,” whatever the hell that means. And I like to take long night walks with my dogs and, honestly, I have my headphones in and I listen to podcasts or rage-listen to the news, and sometimes it’s hard to hear if a biker or a jogger is coming up from behind me. And my neighbor-—he wouldn’t start with the chainsaw ripping, right? He’d know from watching my nightly routine that I typically get back to the house at just around 8:45, and I let the dogs in through the side door and then go out back to the garbage cans, alone, to throw away the poop bags.

Out back, by the garbage cans, where the orange-tinted garage light doesn’t quite reach.

So he’d get as close as he could, my angry-about-the-trees neighbor, knowing I’ve still got the headphones in, and then he’d let rip on the chain and the night would shatter with the noise of it all and he’d walk away, dripping wet but satisfied, to the sound of dogs barking from inside my house.

Now that horrifies me, and it’ll maybe have me walking the neighborhood with one headphone popped out. For a few nights, at least.

When I write, I like to lean on the things that are gonna carry over into the real: into the apartment lobby, the public library, the garbage cans next to the garage. But you don’t need a classic trope of a setup to make something truly horrifying. That sound outside your living room window? It’s probably just tree branches on glass, sure, and that’ll stop when the wind calms down. But that stack of bills on the kitchen table? That stack isn’t going to blow away by itself. Lovecraftian beasties are uncaring in their vastness, and hey, so’s the mortgage company.

I lean into those things that we fear, maybe not-so-deep down, and I try my damndest to plant them in my stories and to dot my characters’ lives with everyday stresses and paranoia. That’s how I approached “Safe As Houses,” and here’s the thing about that story in particular: It’s true, mostly, except for the parts that are only a little bit true.

The true parts of the story are the ones that keep me up at night, that have kept me up nights. Some of the things in the story didn’t happen in real life until after I’d written it and sent it off and was so fortunate to be accepted by Dark Ink and Rebecca Rowland, the anthology’s amazing editor.

The things that happened later did happen, though, and it’s sometimes hard to think about the veil between fiction and reality and what comes next. So I don’t, mostly, and I just try to write the next thing and ignore the pink chunks of mouse poison sitting beneath the vents in my living room. There’s comfort in that—in writing the next thing, I mean. This year especially—it’s still 2020 as I clack away at this post—there’s something to be said about taking comfort in horror.

I’d always shake my head at that line: taking comfort in horror. It wasn’t until this year that I really understood it, though. 2020 was a whole lot of things for a whole lot of people, but it was most certainly a watershed year for horrors, both real and imagined.

And I realized, I read a shit-ton of horror. I always knew that, of course, but in 2020 I read (and bought, with the intention of reading) more horror than ever before. It wasn’t even close. I dove into those stories willingly and gave myself up to them wholeheartedly. I found comfort, there in the depths of the horrific.

I don’t think “Safe As Houses” is a scary story. It’s not going to make you jump out of your chair. But I do hope it makes you (metaphorically, at least) unpop that headphone as you take its little, true horrors with you into the night.

Alex Giannini's story in The Half That You See, "Safe as Houses," follows married couple Carrie and Will as they move into a new home and a new phase of their lives…with all the horrors that it brings. You can follow Alex on Twitter @alexjgiannini. 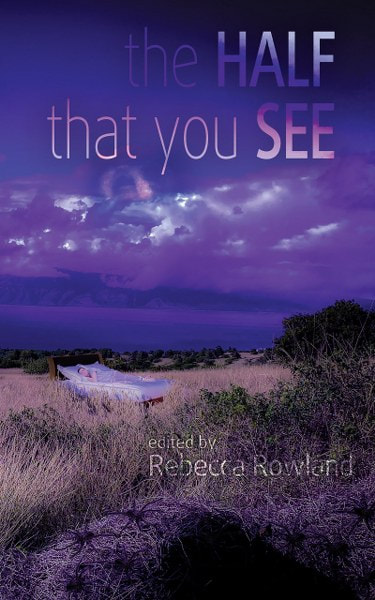 The Half That You See
Genre: Horror Anthology
Edited by Rebecca Rowland

“Believe nothing you hear, and only one half that you see.”
-The System of Dr. Tarr and Prof. Fether by Edgar Allan Poe (1845)

Poe’s classic tale told of a state of the art hospital boasting a curiously experimental treatment, but things were not as they seemed. In The Half That You See, twenty-six writers from around the globe share their literary optical illusions in never before seen stories of portentous visions and haunting memories, altered consciousness and virulent nightmares, disordered thinking, and descents into madness. Take a walk down the paths of perception that these dark fiction raconteurs have tunneled for you, but keep a tight grip on your flashlight: the course twists and turns, and once you’re on route to your destination, there is no turning back. That which creeps about in the poorly lit corners of the human mind has teeth, and it’s waiting for you.


"Chalk" by Elin Olausson
A young man rents a room at a bed & breakfast and meets a girl who sleepwalks during the day and is only herself at night.

"Winnebago Indian Motorhome by Tonka" by Eddie Generous
Chasing down nostalgia, Josh Dolan buys a vintage Tonka Winnebago, but it isn't quite like the toy he'd had as a kid; this Winnebago knows the future and it knows Claire Dolan's secrets.

"Sepia Grass" by Sam Hicks
A young man begins to question the recurrent visions he has always believed to be flashbacks to a childhood drug overdose.

"Turn a Blind Eye" by Kelly Griffiths
An explosion leaves an ornery pharmacist with shards of mortar in his eyes and disturbing changes to his vision, especially when he looks in the mirror.

"Falling Asleep in the Rain" by Robert P. Ottone
A man recounts his youth through a dream, revealing as a young boy his experiments with love for another boy, only to face the ire of his murderous father.

"Black Dog Blues" by Luciano Marano
In a story inspired by an actual urban legend popular among American truckers about a spectral black dog that appears to drivers just before a lethal crash, a haunted man recounts his own devastating encounter with the creature and sets out for revenge with a hapless hitchhiker reluctantly in tow.

"Imaginary Friends" by Nicole Wolverton
Julie Strawbridge is called in to see the principal of her nephew Augie's school after he is expelled for selling imaginary friends to his classmates for a dollar.

"Boogeyman" by Susie Schwartz
One boogeyman; two perspectives, and the horror of mental illness that torments them both.

"Safe as Houses" by Alex Giannini
Carrie and Will moved into a new home, into a new phase of their lives. But every love story is a ghost story, and theirs is no different.

"The New Daddy" by Scotty Milder
A crumbling marriage and a new home is filtered through the eyes of its smallest witness.

"Cauterization" by Mack Moyer
A woman on a methamphetamine binge harbors a dark secret from her past that begins to manifest in vivid waking nightmares that may, or may not, be real.

"The Tapping at Cranburgh Grange" by Felice Picano
When an American couple leases and then buys a manse in England, they become aware of a strange noise only some people can hear.

"Elsewhere" by Bill Davidson
Colin lives a stressful life in an overcrowded flat with a sick daughter and a mother with dementia, in the middle of crammed and noisy London. More and more, however, he is elsewhere.

"Daughters of the Sun" by Matt Masucci
A retired homicide detective living in Florida finds that a past case investigating a dark nature cult twists into his reality.

"The Coffin" by Victoria Dalpe
A young woman still grieving a recent loss discovers an exhumed coffin on the street.

"Old Times" by Mark Towse
A man suspects his wife is cheating on him, and when she leaves for the evening, he considers the possibility over a bottle with an old friend.

"Lonely is the Starfish" by Lena Ng
Many people have pets, but one lonely young man becomes too close to his pet starfish.

"Hagride" by Justine Gardner
A cormorant speaks, and Josie tries not to listen as it begins to resemble ghosts from her past.

"Raven O’Clock" by Holley Cornetto
A man seeking shelter from the tragedies of his life finds more than he bargained for in a mysterious cabin.

"Officer Baby Boy Blue" by Douglas Ford
An eye injury and a grotesque gift from a police officer in a hospital emergency room ultimately leads a young man to special properties of sight.

"The Intruder" by Lamont A. Turner

Suspecting someone has invaded her home and the homes of those close to her, a woman struggles with delusions that may not have originated with her.

"Alone in the Woods in the Deep Dark Night" by Edward R. Rosick
Trapped in his cabin by a howling snowstorm in the desolate wildness of Michigan's Upper Peninsula, Gary Chandler finds that freezing isolation is only the beginning of a descent into bloody madness.

"Mesh" by Michael W. Clark
A regular guy wants too much control in the modern global community: over both his home and his wives.

"Der Hölle Racht" by Laura Saint Martin
A victim of domestic violence embarks on a drug-fueled journey and rampage.

"The Red Portrait" by Mahlon Smoke
A frustrated artist spies a forgotten portrait in a shop and finds himself consumed by its beauty. 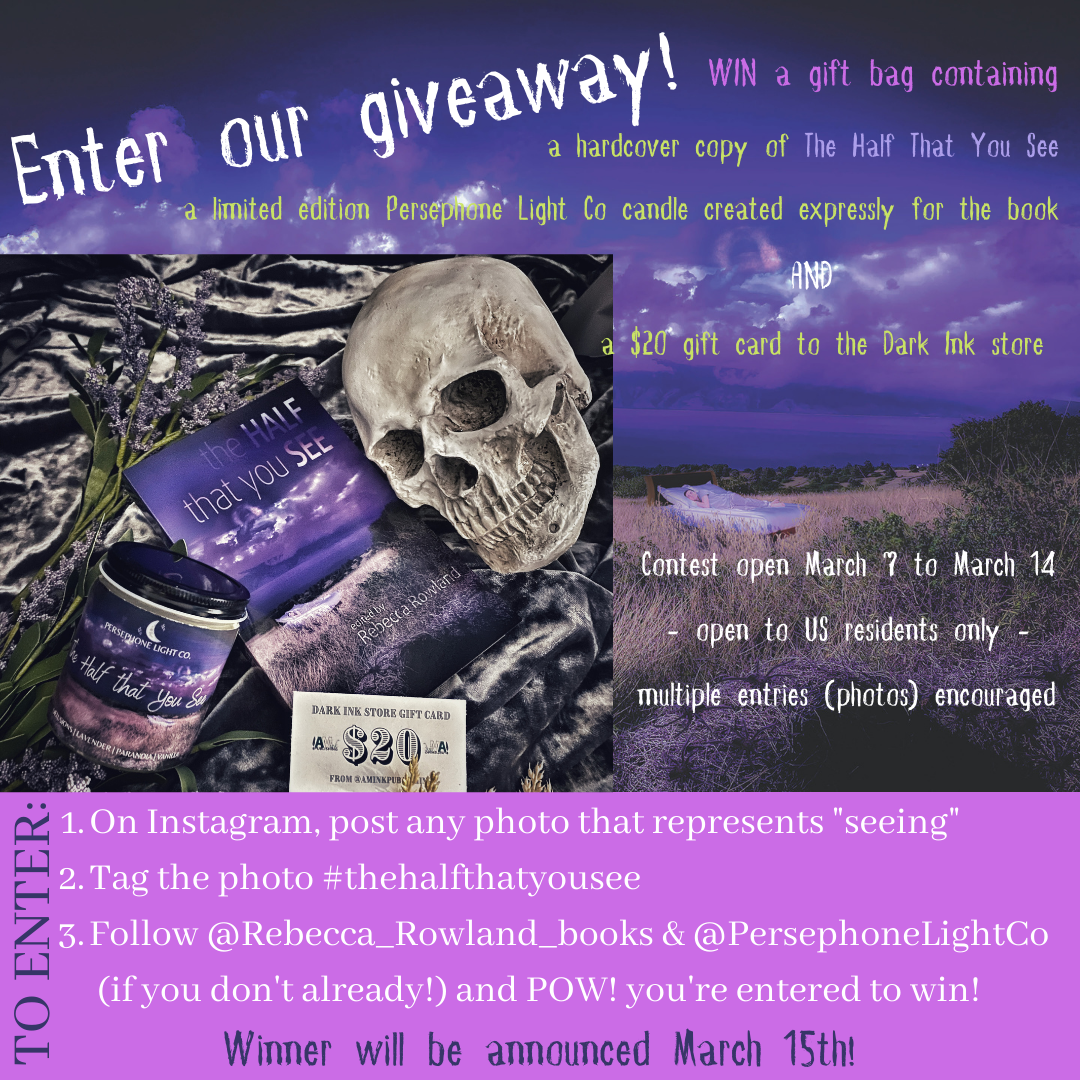 Follow the tour HERE for special content and a giveaway!
$10 Amazon giftcard,
Mystery Box of Books
– 1 winner each!