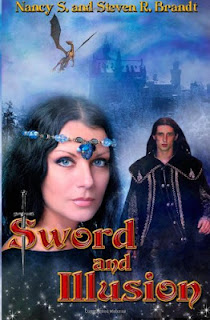 MOONRAZER was already a famous warrior when she drove the Navin from her homeworld, wrested the Sword of Justice from dragons, and became the first Exalted Warrior of the Sarl in seven generations. But now, as she is approaching her 40th birthday, she faces her most terrifying challenge of all--finding a mate and conceiving a child.

PRINCE VARIAN of Tellan needs an heir to his throne before the Festival of the Dragon Moon or the Dragons will kill him and his sisters. Twice, he has taken Dragonmarked wives to beget such an heir. His first wife, Violetta, ran away from him and after years of searching, he declared her dead and took another wife. Five months ago, his second wife and child were found dead. Now, Violetta has contacted him on her own deathbed to tell him he had a daughter sixteen years ago.

When he learns that his lost daughter may be living among the Sarl, and that the Exalted Warrior of the Sarl herself is looking for a mate, he discovers two chances to save his kingdom.

Together, Moonrazer and Varian must deal with intrigue, treachery, and even an assassin to help each other and save their kingdoms. However, even love may not be strong enough to save either world from destruction.

5.0 out of 5 stars amazing!! October 14, 2012
By Rob Petersen
Format:Kindle Edition
This was an amazing work of fiction. I love to read and I read this book twice. I can not wait for the second book in this series. I was totally in love with the character Greenblade. Waiting for Sword and Incantation is harder than waiting for the next Jim Butcher book. And I LOVE his writing. Maybe I have found a new favorite fantasy author!
Nancy is a stay-­‐‑at-­‐‑home mom and full-­‐‑time writer/editor for a small epublisher. She is an Army veteran, kidney transplant recipient and cancer survivor, as well as a long time member of Weight Watchers. She'ʹs been writing romantic fiction for over 20 years and has had two books published prior to this one. Her hobbies include many kinds of needlework, digital scrapbooking and making jewelry. She likes to say she "ʺlives"ʺ on Facebook.

Heroines With Heart is a massive blog tour that runs throughout 2013, that features books with strong female protagonists. We have authors from several different genres, including young adult, mystery/thriller/suspense, romance, sci-fi/fantasy, and Christian fiction. We are also giving away fun digital prizes and sharing new and noteworthy books throughout the year. Want updates?