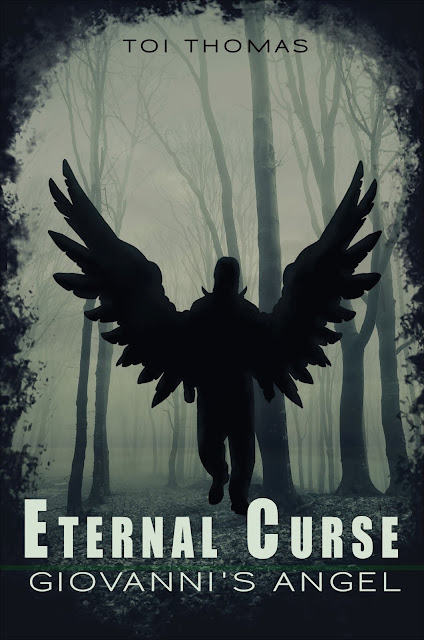 -- Eternal Curse sprung from a dream how, have dreams influenced you in your life?
I haven’t had a lot of experience with dream involvement in my life. Before experiencing the reoccurring dream that inspired me to write Eternal Curse, I didn’t remember most of my dreams. For the most part I could always tell whether I was having good or bad dreams, and few nightmares have crept through my consciousness and stuck with me.

-- Have you ever had a dream of premonition?
I’ve never experienced a clear full on premonition, especially not in my sleep, but daydreaming is a little different. There have been a few times when I thought I had imagined something and it turned out to be real, but I wouldn’t necessarily call these premonitions. Sometimes we are influenced by things around us without realizing it, but that doesn’t mean that I don’t believe in such things. People often go on about whether such things are heaven sent or of the devil; I think it depends on the person and the circumstances.

Having said that, I do find that I have a habit of bringing up subjects that seem rare, odd, or out of place, only to have them become quite relevant soon after. I’ll spark up a conversation about someone who was famous years ago only to find out a few days later, they have just passed away.

-- How much of the characters stems from your dreams and how much stems from your creativity?
This is a difficult question to answer quickly. The only two characters to appear in my dream were the gray man and the old man. They are, in the book, about 75% of what they were in my dream. I only changed them a little and added to them. All the other characters I made up.
I guess the question would be how much of these stem from creativity or familiar relations. While I did consciously craft each of the other characters in this story, about half of them are based on people I know in some small form or other and all the characters seems to share some kind of similarity with me. I’m over this book, even though I tried really hard not to be.

-- Do you try to dream in a special way? I have personally read books that train you to have lucid dreams. And I wonder as you had a dream that impacted you to write a book, if you have made the effort to dream up another book?
Whoa there, that quite a few questions.

1st- I don’t try to dream in a special way unless I’ve just seen something disturbing. Then I curl up with a teddy bear, squeeze my husband, and try to think happy thoughts. I think it works. Like I said, most of the time I don’t remember my dreams.

2nd- It’s funny that you ask about training myself to have lucid dreams. I bought a book on that years ago for my husband because he was having some strange dreams. He used the book and it helped a little so he simply added it to the bookshelf. After I wrote the second draft of Eternal Curse, I thought maybe I should look into that book and see what it says about dreams. I read one or two page, but never applied anything I read and became distracted, never returning to finish the book.

3rd- I haven’t been losing sleep just waiting to dream up my next book. After writing Eternal Curse I think my overall creativity was sparked and ideas began to flow through my mind constantly. I don’t pursue every idea right away, but I do write every idea down and add as much detail as I can. If ever I am without ideas, I have plenty to go back to and explore.

With that being said, I did have another short dream series that has inspired me to write another book, but unfortunately it didn’t last as long as the first, so I am having to create most of the story from scratch. The one thing that stands out from the dream is a magical sword and a royal bloodline. I can’t wait to see where this will take me.

-- Do you encounter your characters whilst day dreaming?
During the time in which I was writing my story, my characters followed me around everywhere; now, not so much. I do however find myself talking to Mira sometimes. I think because she’s a combination of many women in my life including myself, she feels like an old girlfriend who’s with me whenever I need her.

-- What is your system when writing? Are you a meticulous outline planner or a pantser?
I am definitely an outline planner. I outline everything. If my I know how I want my story to end, I outline the whole story from beginning to end. Then I outline individual chapters before moving on to outline the lives and details of my characters. I also make lots of lists. I write down idea I may or may not use and keep track of what is in progress and what is done. My book 40 Days and Nights of Eternal Curse give a clear picture of just how much work and effort I put into my writing, especially how much went into writing Eternal Curse.

-- What is easier for you, story line (plot) or setting?
Plot is by far the easiest thing for me, everything else is a struggle. I love writing and will always do it, but that doesn’t mean every aspect of writing comes to me naturally. Coming up with ideas, themes, transitions, twists, catalysts, and climaxes are the easy part. Going back to build worlds and add in all the details is where I seek, greatly and humbly, advice from others.

-- Do you see spin offs or a series stemming from secondary characters?
Absolutely! The primary series is already in effect. The Second book is finished and awaiting editing and the third is very much a reality.
As far as spin offs go, there is so much going on with the characters and the world of Eternal Curse that it would be impossible to tell the whole story in 3 to 4 short books. I think there will definitely be spin offs down the read and perhaps I’ll even do some collaborations with some other authors.

-- And for fun....Favorite food? Favorite drink? And I must know WHY BATMAN?
Favorite food: It changes, but I do really enjoy rice dishes.

Favorite drink: Apple Juice; what can I say, I’m a big kid and I need my vitamins.

Why Batman? Why not? I appreciate his background story. Aside from him being filthy rich, he is essentially an orphan and orphans hold a special place in my heart, which is evident in my writing. Many hero and villain stories begin with what happen in the early years. After Bruce Wayne watched his parents get killed in front of him, he could have easily been turned into a villain, but he chose to be a hero. He doesn’t have any special powers and he is really smart. He defeats most of his opponents simply by using his mind; he out thinks them. Aside from the fact that he’s the only comic book hero with a cape that I like (not big on capes) and he has a similar attitude to mine, I like Batman because from childhood to adulthood the fact remains that someone like him could exist, even if he doesn’t. There are real people in this world, without special powers, willing to fight to save others and that’s Batman represents to me.