The Black Hours by Alison Williams 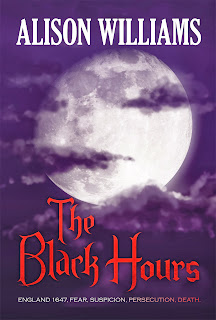 ‘Look upon this wretch, all of you!  Look upon her and thank God for his love and his mercy.  Thank God that he has sent me to rid the world of such filth as this.’


1647 and England is in the grip of civil war. In the ensuing chaos, fear and suspicion are rife and anyone on the fringes of society can find themselves under suspicion. Matthew Hopkins, self -styled Witchfinder General, scours the countryside, seeking out those he believes to be in league with the Devil. In the small village of Coggeshall, 17–year-old Alice Pendle finds herself at the centre of gossip and speculation. Will she survive when the Witchfinder himself is summoned?
A tale of persecution, superstition, religious fundamentalism, hate and love, ‘The Black Hours’ mixes fact with fiction in a gripping fast-paced drama that follows the story of Alice as she is thrown into a world of fear and confusion, and of Matthew, a man driven by his beliefs to commit dreadful acts in the name of religion.
5 ***** Amazon reviews:


"The Black Hours" is an enthralling book, well researched, and beautifully written.


I was disappointed when I reached the last page - didn't want it to be over!


(Alison’s) quality of writing is tremendous, her ability to take the reader back in time outstanding, and her talent for making history engaging is enviable.


What inspired you to write this particular story (and/or series)?


I feel very strongly that the victims of Matthew Hopkins have largely been forgotten – all too often they are just names on a list in a book or in a museum. We tend to forget that they were real people, with real lives, families, dreams, hopes and fears. What they suffered was dreadful and I felt compelled to give them a voice. Although ‘The Black Hours’ is fiction and Alice never existed, the methods Matthew Hopkins uses in the novel are all methods actually used on real victims. I hope, in some small way, the novel pays tribute to those real victims.

Was there any research involved in your work?


Lots and lots! As a writer of historical fiction I have to be so thorough about the smallest detail, down to the level of making sure that certain words were actually used at the time in which the book is set. I did an enormous amount of background reading, including the infamous ‘Malleus Maleficarum’ or ‘Hammer of the Witches’ - a 1486 treatise on the prosecution of witches which was a thoroughly unpleasant read! I also spent a lot of time visiting the villages and towns in Essex in which the book is set and also visited the cells of Colchester Castle, where Hopkins interrogated suspects.


I adore Hilary Mantel – her writing is absolutely amazing and inspiring. I think she has brought the historical fiction genre to a whole new level; absolutely meticulously researched, intelligent, thought-provoking and entertaining! I also love Karen Maitland and Elizabeth Kostova – both write beautifully. Their work has a wonderful atmosphere about it; you become so immersed in the worlds they create.


I go one of two ways when I’m engrossed in writing – I either forget to eat at all or I eat without thinking about it. I’m a vegetarian but that doesn’t mean that I always eat healthily. I have a bit of a crisp addiction – particularly salt and vinegar Pringles. I also eat a lot of toast (quick and easy). And endless cups of tea of course.

Who gets to read your drafts before they're published?


I have a group of friends that I met (online) while completing my Masters in Creative Writing. I know that they are totally honest and I completely respect their opinions. Aside from that my husband (he’s an ex-journalist and is great at proof-reading!) and my 17-year-old son Scott – it’s not always true that family will tell you what you want to hear.  Scott is actually my harshest critic. He certainly doesn’t believe in sugar-coating criticism and he can be relied on to tell me the truth.

Share with us your biggest hurdles in the writing process?


Time! Juggling work commitments, family and everything else is a real challenge. I have two children and, despite the fact that they are teenagers, they still take up a huge amount of time - driving them around, clearing up after them (I know, I know!), washing, cooking, cleaning, walking the dog etc! I’m lucky enough to be able to write practically full-time (I also do the admin for my husband’s company and write articles for websites) but there are so many distractions – people tend to think that if you’re working from home you can drop everything to meet up for a coffee or have long telephone conversations– it’s really not that easy!

Where can readers find you and your book(s) online?

Amazon.co.uk author page: http://www.amazon.co.uk/Alison-Williams/e/B00GNHUMTI/ref=ntt_dp_epwbk_0
Alison Williams has been writing ever since she can remember – scribbling down and (badly) illustrating stories in exercise books whenever she wasn’t actually reading (which was most of the time when she was awake). After getting married and having two children, Alison worked in education until deciding to bite the bullet and do what she had always wanted to do which is to write full-time – it only took her until her forties! Alison now works as a freelance writer with articles published on line and in magazines. From 2011-2012 she studied for a Masters in Creative Writing with the University of Glasgow. As part of her studies, Alison wrote my first novel ‘The Black Hours’ – available now on Amazon.
Alison is fascinated by history – but not so much the kings and queens, the emperors, the military heroes or the great leaders. More the ordinary people whose lives were touched by the decisions, the beliefs and the whims of those who had power over them and who now fill our history books.  When Alison was about ten years old she went with her family to visit Winchester Cathedral.  As she wandered through this magnificent building with its arches, its pillars, its carvings and beautiful windows, her mother was looking less than impressed. Wasn’t she inspired? Awed? No, not at all – ‘All I can think of’ she said ‘is the poor buggers who had to build it.’ And that remark has stayed with Alison since. She wonders just what was it like to be one of those ‘poor buggers’ toiling to create the soaring gothic arches of Winchester cathedral? Or a 17th century mother living in London, scared to death as the plague took hold? How did it feel to a woman in Berwick-Upon-Tweed on The Scottish border in 1296 watching the English troops storming through the town? And what about all of those accused, tortured and horribly murdered in the witch trials that swept through Europe? How did it feel to be one of those women, terrified and desperate? It is this that Alison finds fascinating – how it was for the ordinary people, caught up in events they couldn’t control. It is their stories that she wants to tell.
Posted by M.C.V. EGAN at 12:30 AM