ARE YOU READY FOR HORROR???? Here is MICHAEL W.GARZA with THE LAST INFECTION and THE HAND THAT FEEDS

The series began with one little boy in The Hand That Feeds and ultimately follows the remains of the human race as they struggle for survival in a hostile world they no longer control. Come join what's left of the living as they fight for every last breath.

The infection swept across the country like a tidal wave. Survivors cling to life as the infected own the night and the dead walk the streets. Chris has endured on his own and bumping into Jake and Alicen weren't in his plans. The young brother and sister have plans of their own, but Chris has heard too many promises of sanctuary and infection free zones. Jenn's arrival turns his attention to the one thing he never thought he would face again, hope. They make a pact to reach the kids safe haven, but only time will tell if anyone can survive the last infection
Watch out zombie world: Michael W. Garza has arrived! The Hand That Feeds has everything you could possibly want in a zombie book (and more!).
Zombie Guide Magazine
A parents love, and sanity, is put to the ultimate test in The Hand That Feeds. Michael Garza has delivered us one heck of a dark, mind-bending horror read.
The Bookie Monster

Michael W. Garza often finds himself wondering where his inspiration will come from next and in what form his imagination will bring it to life. The outcomes regularly surprise him and it's always his ambition to amaze those curious enough to follow him and take in those results. He encourages readers to peek at his latest work as well as the material he's published in the past. He sincerely hopes that everyone will find something that astonishes, surprises, or simply scares the heck out of you. 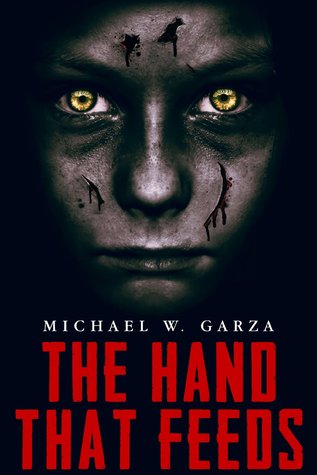 THE HAND THAT FEEDS
How far will a parent go to keep their child alive? John and Angela Mason’s lives are brought to a tormenting halt when their ten year old son is reduced to a lifeless shell. John watches his wife slip into madness as his son rises from the dead. He realizes they must escape the terrifying infection in order to survive but how can he choose between the insanity consuming his wife and the undying hunger of his son. An appetite for death will come in one form or another and it will be left to John to decide on the hand that feeds.
Posted by M.C.V. EGAN at 12:30 AM