THE MAN ON THE WASHING MACHINE by Sue Cox 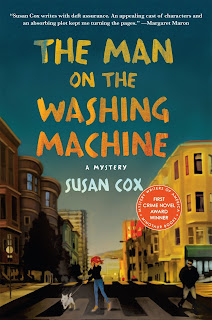 ☆☆☆☆☆
My Five Star Review
Theophania true to her name has her share of epiphanies as the story of ‘The Man on theWashing Machine’ unfolds.  She realizes that she has far less secrets than those around her, and she has plenty of those.


The madcap adventure is a clever, cute, and quick paced read. I enjoyed the transatlantic angles. And the San Francisco setting.
Colorful prose made the setting and events very easy to visualize, and the emotions of a woman so wounded by her past that she is afraid to afraid to love.
The few people about whom she has allowed herself to feel strongly are not at all what they seem, but as her world comes crashing down in death, violence and mayhem she realizes that she is indeed loved and capable of reciprocating.
My favorite character was her grandfather; which was the one non quirky character. That is not to say that I did not love the wide array of unique and wacky characters, I simply loved the grandfather’s presence in her thoughts as well as in person; there were many witty remarks and I will always remember that impulsive does not necessarily mean imprudent.
I liked the fact that the author tied up loose ends and I am sure we will all read more of Theophonia’s adventures.
I bought my copy at MURDER ON THE BEACH
BUY BOOK on AMAZON
Posted by M.C.V. EGAN at 3:42 PM