Excerpt ~ Defined by Others 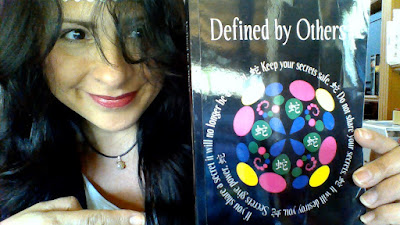 I sat in Pete’s office after the video ended, staring at the screen with her frozen image. The illness that eventually took her life left her looking gaunt and ravaged. When her coffin was lowered into the grave the day before I was left feeling as if with her body, her casket, her illness they were also burying that which makes life an adventure and with that much of my youth and perhaps some part of my future.


As I stared at her face my mouth felt dry, my hands had a slight tremor mimicking my lower lip, and not even in my thoughts could I quite find a word to define this moment, to describe my feelings. I burst out crying in loud, wracking sobs and I heard the door open. Through my heavy tears the contact lenses swam and moved in my eyes, making everything seem a blur. I felt the hand on my shoulder before he handed me the tissues.


“Can I get you something Anne? Anything? Water? Coffee?” he asked.


I blew my nose and composed myself as best I could.


“It’s a little early, but I can offer you something stronger if you’d prefer,” he said as he walked toward a bar in the back of his office.


The musical clink of the ice cubes against the glass was the familiar tone made only by fine crystal. I recognized the Baccarat pattern; it was the same as the crystal in my parents’ home. He hesitated and cleared his throat before he spoke again.


“I know speaking ill of the dead is in very poor taste, but Amanda was not a nice person. I am bound, as her attorney, to follow her instructions to the letter. You can watch what is obviously a pretty nasty recording as many times as you wish, but when you are done I need to destroy it, in front of you. Then I am to hand you a box, and again you are to open it in absolute privacy, so preferably not in this office. Can I suggest I destroy it right here and now? I have pliers and I can smash the flash drive into nothing.”


“It really is not at all what you imagine. She was even nice and apologized in it. She could be an absolute bitch, but my tears and sadness are not for her.”


“We were all surprised to see you at the funeral. I actually expected to fly down to Florida and hand all this to you there. She left a nice expense account for that. How long have you been in town?”


“Just a few days. Mom assumed they’d be flying up for Thanksgiving. They are so afraid Obama will get re-elected after the Romney tape that they wanted to vote in person.”


“He might win you know. Although you would not know it in this town by the Romney signs everywhere.”


“Yeah, yet another choice where I absolutely failed my parents.”


“Don’t knock yourself, I do not think any of us live up to parental expectations.”


I drank the ice cold water and nodded my head at the screen. No words were needed as he closed the file and Amanda’s face disappeared from the screen.


He pulled out the flash drive and reached into a drawer. He crunched and cracked the flash drive so viciously that I knew he too had fallen prey to one or more of Amanda’s nasty games.


“I think it is pretty much done. If you are not sure, why don’t you shoot it?”


We started to laugh in unison. I did not recognize it at the time, later though it became clear that we bonded, laughing over the nasty remains of a common enemy. I gathered my things, including the package Amanda had bequeathed me, and Pete walked me to the car.


“It would only be a conflict of interest to offer help in anything regarding Amanda, so if you need any help with your parents’ home, don’t hesitate to call me. Do you still have the card I gave you yesterday at the funeral?”


“It is such a small town, Pete, even if I lose the card, now that everyone knows I’m here it will be hard to avoid me.”


I stopped at the grocery store on my way home since everyone in town knew I was there, there was no sense in driving into the city to get what I needed. I had already put a nice dent in Mom’s pantry and Dad’s bar. I had been there well over a week, trying to understand what I had missed, how I had not known about Frank. Then Amanda died and curiosity got the better of me. What did Alison say?  Her voice echoed in my mind;


‘Enemies always attend each other’s funerals. I guess it is a way of knowing they won …’


Well, we weren’t always enemies, and sometimes it is the good and healthy memories that make someone attend a funeral. Amanda was the first of us to die. At forty-seven it seemed too young to bury a contemporary. Once she was diagnosed, it was only a matter of time. In fact, it was pretty amazing she lasted as long as she did, money it seems, can buy you time if nothing else. And in 2012, time can mean science and technology might just come up with some medication or medical treatment that changes everything.


Unfortunately, it had not worked for Amanda, but so far it had worked for my dad. This last stroke seemed to be the first time he had an untimely health issue, with no easy fix in sight.


Amanda fought hard for a good two years and then lost; the image of her greenish skin color and emaciated body made that perfectly clear. Her beautiful heart-shaped face was gaunt, and her eyes were sunken in the video. However, the voice was the strangest and most unrecognizable trait. Was it karma to go so slowly and with so much suffering? Our shopping carts collided, and I was startled by that as much as I was startled by the tone of her voice.


“Connie? I did not see you at Amanda’s funeral yesterday. I just thought you were not in town.”


“I don’t like funerals, so I sent flowers, I saw the comments and pictures everyone posted on Facebook.


Frankly I was surprised you were there.”


“Facebook? People posted pictures from the funeral? I have some friends in Florida who use it but I personally avoid social media; I did consider it as a tool to spy on my kids.”


“Most people in town use it in a very public way.”


She looked at me in the oddest way so I had to ask.


She sighed, loudly the way a parent or teacher does when exasperated that a kid cannot give the right answer or tell the truth.


Small town gossip and now combined with the use of cyberspace, I could only assume was not a great combination. I began to feel uneasy and wondered if it had anything to do with Frank. I decided to disregard the thought. I simply could not imagine that whatever Connie was referring to was of any serious consequence to me.


“You know Connie, my dad is really ill, I am just here getting the house in order for my folks and trying to figure out the best way to help get them settled in


“I am really sorry about your dad Anne. We really need to talk; it’s about Frank and… well it’s about Frank. I can go over to your parents’ house tonight, I’ll bring a nice dinner.”


This time I could easily and clearly find the word, THE WORD that defined the moment; dumbfounded. In a small town gossip travelled like wildfire; at least in this small town it did, but mom had assured me no-one knew about Frank. I was not sure what to say, but Connie’s abrupt manner did not give me much of a chance.


“Believe me, this is just as uncomfortable for me as it is for you, but we really need to talk. Simply put, it is about Frank and Mike.”


I learned at a very young age about the moments that define us in life and how sometimes they feel as concrete as a ton of bricks falling loudly and painfully on top of us. This was one of those moments; not at all like the subtle hidden moment when Pete and I laughed together. So my mother was wrong and if my Frank’s problem was involved with Connie’s Mike. Well, there it was and it made sense now the smartphones were clicking away at the funeral. It was my turn to sigh, this one was a sigh of defeat.


“At what time tonight?”


“Is seven okay? Like I said I’ll bring dinner.”


“You really think we’ll be hungry under the circumstances? I asked perhaps in a tone too sarcastic and maybe even with a touch of cruelty.


“I nodded robotically, I started to pile food into the shopping cart, and as the salesclerk rang it up I noticed that I had chosen all of my husband’s, Frank’s favorite foods.
Barnes and Noble
goodreads
amazon
iTunes.apple.com